KINGSTON, Jamaica – India’s President, Ram Nath Kovind, Tuesday said Jamaica and his country should use their shared ideas to develop strong partnerships in a wide range of areas, including education. 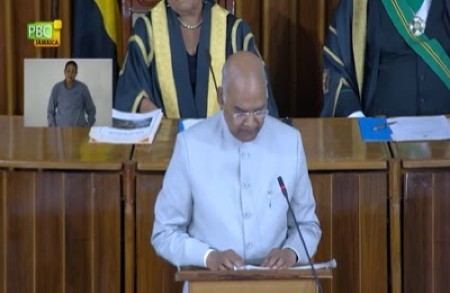 India’s President, Ram Nath Kovind, addressing joint sitting of Jamaica Parliament.Addressing a joint sitting of Parliament, the Indian Head of State outlined a number of areas where the two countries could co-operate including, development of the pharmaceutical industry, music, sports and education.

“Our partnership will not only lead to building a bright future for our people, but will also act as a bridge to a more united, human and prosperous     ,” he said, recalling the world view of Mahatma Ghandi, regarded as the father of the Indian nation.

“I want the freedom of my country so that other countries may learn something from my free country, so that the resources of my country maybe utilized for the benefit of mankind,” He quoted Ghandi as saying.

Kovind said in 2020 his country had signaled its intention to restart new Indian institutes of technology abroad, adding “I am happy that Jamaica is one of the first countries to express an interest in hosting an Indian Institute of Technology.

“The national education policy has also opened up specialized technological courses in premier Indian colleges and universities for foreign students,” he said, adding that Jamaican students should seek to take advantage of that opportunity “by studying at some of the best institutions respected globally, charging only a fraction of the costs compare to western institutions”.

He said India’s education is second to none and that its graduates head many of the largest businesses and technological companies in the world.

“India is also the hub of start-ups and innovative technologies,” he said, as Jamaica’s Prime Minister Andrew Holness noted that the cooperation between the two countries “has been central to the economic, cultural and social development of our island.

“Our social mosaic has been enriched by the contribution of Jamaicans of Indian descent and the Indian diaspora in Jamaica who have provided unquestionable commitment to the growth and advancement of Jamaica.”

Holness said this has been a testament to “our inclusive reality as evidence by our national motto “Out of Many One people”.

Holness said that he also wanted to place on record, India’s contribution to Jamaica’s efforts in dealing with the COVID-19 pandemic, saying that New Delhi had responded positively when asked to provide vaccines to the Caribbean island.

“India was the first cou8ntry to respond to Jamaica’s urgent call for vaccines. I myself…was amongst the first recipients of the dosage,” Holness told the visiting Indian Head of State.