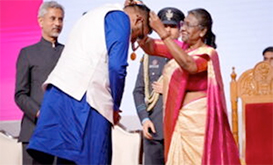 President Irfaan Ali receiving the Pravasi Bharatiya Samman Award from Indian President Droupadi Murmu in India on Tuesday (Photo courtesy Office of the President) “Dr Irfaan Ali is the President of the Cooperative Republic of Guyana. Through his efforts, he has been able to put aside racial differences in Guyana and has been working to diversify Guyana’s economy from oil and gas dependence to a more public welfare-oriented approach,” according to the citation for the award.

The award was conferred on the Guyanese head of state by Indian President Droupadi Murmu at the ongoing 17th Pravasi Bharatiya Divas Convention, the largest gathering of persons of Indian origin living outside of the sub-continent. The Convention ends on Wednesday.

President Ali, who is one of three Caribbean Community (CARICOM) nationals to receive the award for his contribution to politics and community welfare. The other awardees are Trinidad and Tobago judge, Justice Frank Arthur Seepersad and Suriname’s Dr. Dewanchandrebhose Sharman.

The citation noted that President Ali had also championed environmental causes, adding “he has great respect and affinity towards India and has been very vocal in extolling India for its achievements in various sectors”.