KIGALI, Rwanda – Baroness Patricia Scotland Friday successfully retained her post as the Commonwealth Secretary General, despite a strong effort by several members of the 54-nation grouping to remove her. 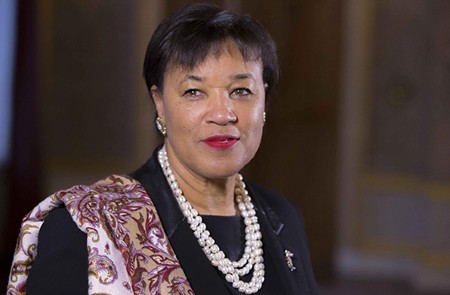 “If I didn’t pull through, God wasn’t ready for me to leave Jamaica yet. I continue to serve, and of course, sincere congratulations to Baroness Scotland,” Johnson Smith said in a message on her Twitter account.

“Thanking all the countries and people who supported me in this journey.”

Scotland respond by saying ““thank you for your gracious congratulations and I am looking forward to working with you closely in the years to come. I am sure you will achieve great things by God’s grace.”

Dominica had nominated Scotland for the post, and the nomination of Johnson-Smith had divided the 15-member regional integration grouping (CARICOM).

Belize Prime Minister, John Briceno, the former CARICOM chairman said that regional leaders voted for “a candidate of their choice”.

In April, the Caribbean leaders had issued a statement indicating that they were still divided in their support for the two candidates – Scotland and Johnson Smith – for the position agreeing instead to appoint a sub-committee to delve further into the matter.

“Those who seek to divide and rule are encouraging Jamaica to present a candidate in opposition to the current Secretary-General, who is serving on a CARICOM rotation,” Browne had told CMC.

Scotland was elected to the post at the CHOGM in Malta in 2015 becoming the second Secretary-General from the Caribbean and the first woman to hold the post.

Scotland had already said that if re-appointed she would only seek to stay in position for two years, a reference to the fact that she would have been in office for a total of eight years.

Scotland had a career as a lawyer and politician in Britain and her time in office has been dogged by allegations of poor leadership, including over a lavish refurbishment of her official lodgings in London, the award of a lucrative contract to a friend and other scandals that have been widely reported in the British media. Scotland denies any wrongdoing.

Her term was supposed to have ended in 2020, but was extended because the Commonwealth summit scheduled for that year could not take place due to the COVID pandemic. After a two-year delay, it is now taking place in the Rwandan capital.

In her speech to the opening ceremony of the summit, she said she was confident about continuing in the role.

“I am determined that, when the role of Secretary General rotates to Africa two years from now, I will hand on the baton with a stronger, more effective, more powerful Commonwealth than ever before,” she said.

Antigua and Barbuda’s Ambassador to CARICOM,  Dr. Clarence Henry congratulated Scotland for the victory as well as Prime Minister Browne “for his unwavering belief in and support of the Baroness…as well as his firm support for Caribbean unity”.