Hundreds of Protestors in Suriname Call for Resignation of President Santokhi

PARAMARIBO, Suriname – Hundreds of people took to the streets here on Monday demanding the resignation of President Chandrikapersad ‘Chan’ Santokhi if he fails to change the socio-economic policies of his two-year old administration that they say have brought untold hardship on the population. 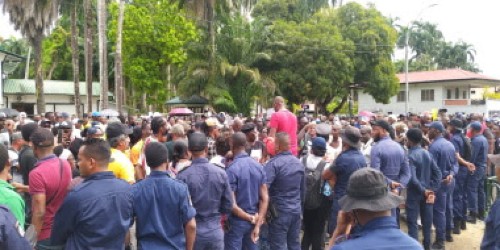 Police officers block the entrance of the Office of the President Santokhi as demonstrators demand his resignation over his socio-economic policies (CMC Photo)President Santokhi, who was due to leave for Paraguay later tonight to attend the Mercosur and Prosur summits, has since cancelled the trip with a government statement later indicating “the President has decided not to go because urgent national issues need his attention”.

Foreign Affairs, International Business and International Cooperation Minister, Albert Ramdin, who is currently in Washington attending a meeting of the Organization of American States (OAS) and who was due to join the presidential delegation in Paraguay, will also return to Suriname immediately.

“There are issues that require the President’s attention, although the visit to Paraguay was short. He would be away for three days,” Ramdin said, while the Presidential spokesman, Alven Roosveld, said that burning issues at the national level always take priority over international relations and that Santokhi has always indicated that the welfare of the population is a top priority.

On that basis, the President remains in the country and is working to solve the challenges that have arisen, Roosveld added.

The demonstrators gathered outside the Parliament building and the office of the head of state and their action followed several calls posted on social media from citizens who have become angry after the latest scandal within the government.

Last week,  it was revealed that through falsified payment orders, several individuals had managed to obtain SRD$40.9 million (One SRD$=US$0.04 cents) from a bank account of the Ministry of Finance and Planning.

The disclosure made by an opposition legislator in Parliament and confirmed by the government is the latest scandal to hit the Santokhi government took office on July 16, 2020. Citizens have also complained at the decision of the President to appoint family members, including his wife as well as friends of Vice President, Ronnie Brunswijk, to senior positions within the government.

The protestors Monday expressed their frustration with the government that has been implementing a series of austerity measures, cuts in the subsidies on water and electricity and lack of funding for the prenatal care for babies.

Chanting, Chan, go home and stop corruption, the protesters called on the government to adopt new socio-economic policies or step down.

“The leaders of this protest are Surinamese who no longer want to watch the people perish because of mismanagement, corruption, nepotism and laissez faire policies,” said a police officer, who was at the forefront of the demonstration.

President Santokhi’s comments on the radio on Sunday that the announced demonstration was instigated by the opposition National Democratic Party (NDP) headed by former president, Desi Bouterse, angered many of the demonstrators.

Santokhi said he has been elected for a five-year term and he intends to serve it out. He said that citizens will have the opportunity to elect a new government in 2025.

But efforts by the protestors to enter the office of the head of state were stopped by large contingent of police officers, as well as members of the Riot Police Unit.

The demonstration Monday coincided with a decision by the oil company, SOL to halt fuel deliveries due to a major government backlog.

The action led to several SOL service stations being closed and long lines of people forming at other gas stations.