GEORGETOWN, Guyana – Guyana, an emerging global oil and gas power house, is celebrating its 52nd anniversary as a republic on Wednesday with the government and the opposition urging nationals to unite for the future socio-economic development of the country. 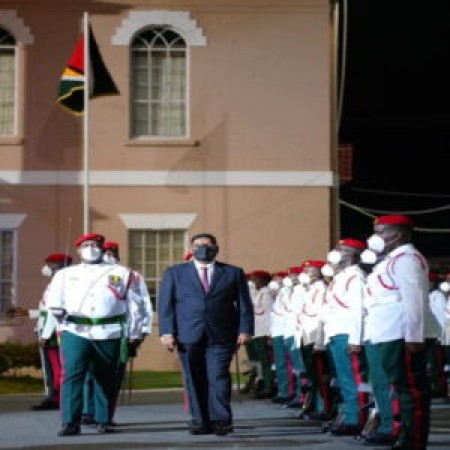 President Ali inspecting Guard of Honour during flag raising ceremonyPresident Dr. Irfaan Ali in a nationwide radio and television broadcast, said Guyanese are now aware of the potential that exists regarding the future development of the republic, adding “we all recognize what is needed to ensure that potential is transferred into results that would bring a better life for every Guyanese.

“From the inception, let me be clear, I and my Government are supportive of constructive criticism. To advance our ‘One Guyana’, as a society, we must have healthy debate, exchange of views and critical examination of policies, programmes, initiatives and plans.”

But he said that these discussions must not be based on selfish agenda, biasness, perception, propaganda, and feelings. Instead, they must be firmly rooted in facts, and a pragmatic understanding of what is required in this rapidly changing Guyana.

Ali outlined 10 areas in which he said Guyana must examine “if we are to pursue the right blend of character and traits that will make us a successful people”.

He listed among them, attitude, character, values and belief systems, being realistic, the governance system and better positioning of the country on the global stage.

“We must be realistic about what we can and cannot do. We must also be realistic in our expectations; we must understand the environment in which we operate,’ Ali said, noting that in being realistic, “we must be humble to accept help in areas where we require help.

He told the nation that achievable targets is not dividing US$750 million by 750,000 citizens, with each person receiving one million dollars.

“Not only is this mathematically incorrect; it is not realistic or achievable, much less sustainable. We have, therefore, set ourselves targets that are not only achievable, but are transformative in nature, namely, cutting the cost of electricity by 50 per cent, 50,000  house lots, 50,000 new jobs, GUY$40,000 old-age pensions, GUY$50,000 “Because We Care” grant; 20,000 Online scholarships.

“These are all achievable targets. We are on track. For these targets to be realized, we must invest in the social and economic transformation of our country,” Ali said, noting that the these investments include energy sustainability, through the gas-to-energy and hydropower projects, new shore-base facilities, major new highways as well as new farm-to-market access roads, supporting the private sector in hotel and other tourism investments, expanding mining, forestry and food production.

He said there is also need for investments in education, and healthcare adding that “the targets we set ourselves must position Guyana as a strong global and regional player.

“Our strengths must be diversified, and not be dependent on our natural resources.  We are, therefore, building an economy that will boast world-class eco-tourism, world-class urban centers, world-class agriculture, and food production using technology, world-class health and educational services, and world-class environmental diversity and ecological services whilst transitioning into new manufacturing, agro-processing and industrial opportunities, along with the development of a hemp industry and its numerous spinoffs.”

Ali said that to support all of this, the governance system must be efficient, reliable, trustworthy, accountable, simple, responsive and flexible to the global environment in which we operate.

“These elements must be built on a modern constitution that must be developed from the people; a process that is ongoing. Our laws being reflective of the direction and development trajectory of the country.”

The Head of State said that Guyanese must understand that the country has billions of dollars’ worth of natural resources and that they must be used for better positioning the country on the global stage.

But in its message, the People’s National Congress/Reform (PNCR) the biggest party in the coalition opposition, a Partnership for National unity (APNU) said that with the country’s vast oil wealth, the achievement of that social and economic justice is well within reach.

“For the PNCR, the achievement of social and economic justice must first be driven by a heartfelt and continuous commitment to all Guyanese by their government. It must also be motivated by a genuine desire to deliver on the obligations to citizens enshrined in the Guyana constitution and in the international conventions on socio-economic rights to which Guyana is a signatory.  Guyanese today do not see that drive and commitment in the present …regime.”

The opposition party said that as such it is taking this opportunity to sign on to a contract with Guyana to urgently create a society based on guaranteed political, social, and economic rights “which grants citizens the “right to a happy, creative, and productive life, free from hunger, ignorance and want.” “Guyana stands at a pivotal point. Far less time than another 52 years is required to create a society free of poverty, inequality, exclusion, and injustice.

On this auspicious day, the PNCR recommits to the grand objectives of those who ensured that Guyana, on 23rd February, 1970, “made the final and decisive ascension of our political and psychological independence” and who placed us on a path of national self-determination and reconstruction,” it added.