GEORGETOWN, Guyana,– Guyana says it has introduced and voted in support of a resolution urging a global call for concrete action for the elimination of racism, racial discrimination, xenophobia and related intolerance. 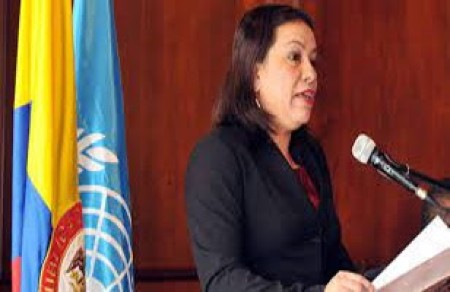 Carolyn Rodrigues-Birkett (File Photo)It said also that the resolution, which was adopted by the United Nations last December also calls for the comprehensive implementation of and follow-up to the Durban Declaration and Program of Action.

“It has been brought to my attention that circulating on social media is the assertion that Guyana voted against the United Nations resolution,” Carolyn Rodrigues-Birkett, the country’s Permanent Representative to the United Nations said in a statement.

“This is completely false and cannot be further from the truth.  As Guyana’s Permanent Representative to the United Nations, I wish to confirm that Guyana voted in support of the resolution when it was adopted in the General Assembly on December 31st, 2020.”

She said that as Chair of G77 and China, Guyana was the main sponsor of the resolution and, jointly with South Africa, facilitated the negotiations for this resolution in the Third Committee.

“The Resolution was introduced by the representative from Guyana in the Third Committee on November 19th, 2020, who reminded the Committee that 2021 would mark the 20th Anniversary of the adoption of the Durban Declaration and Program of Action and, as such, the G77 and China had presented substantive changes to the Resolution aimed at commemorating this important milestone”.

Rodrigues-Birkett said that in her statement regarding the resolution, she had stated that the “Durban Declaration and Program of Action emphasizes that equality and non-discrimination are fundamental principles of international human rights and international humanitarian law and are essential in the fight against racism, racial discrimination, xenophobia and related intolerance

“ It constitutes a holistic agenda that encompasses measures to improve education and awareness, to fight poverty and marginalization, and to secure inclusive development. Its relevance is further strengthened by the recognized nexus between combating racism, racial discrimination, xenophobia, and related intolerance and the achievement of the Sustainable Development Goals.”

The Guyana diplomat said that the “G77 and China views the 20th anniversary of the Durban Declaration and Program of Action as a valuable opportunity to enhance public understanding about its comprehensive nature, and as a timely reminder to all that racism, racial discrimination xenophobia and related intolerance are scourges that must be eliminated ….

“The Group considers that in the forthcoming commemoration, greater attention should be given to the issues affecting People of African Descent. The International Decade for the People of African Descent and the adoption by consensus of the program of activities for the implementation of the Decade is an integral part of the full and effective implementation of the Durban Declaration and Program of Action.”

She said that it should be noted that Guyana invited delegations to co-sponsor and vote in favor of the resolution.

“It should be noted that the automatic generation of the vote as shown on screen in the room at the time of voting is not the final official record of the meeting. It goes without saying, that Guyana, as the proponent of a Resolution, would not have voted against our own resolution,” Rodrigues-Birkett said in her statement.