ST. GEORGE’S, Grenada – Grenadians were awaiting the imminent announcement for the date for the next general election after Prime Minister Dr. Keith Mitchell said he would be approaching Governor General Dame Cécile La Grenade to dissolve Parliament. 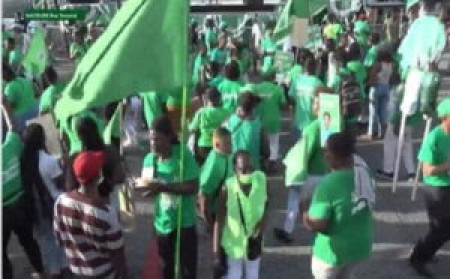 NNP supporters at the political meeting on Sunday nightMitchell, addressing a meeting of his ruling New National Party (NNP) on Sunday, gave no indication as to when he would be approaching the head of state, but there has been widespread speculation here that the polls, constitutionally due by 2023, will be held this year.

“As we move forward, I want to say, there are two stages for a general election. The Prime Minister has to call on the Governor General to dissolve parliament – that is the first stage,” said Mitchell, whose NNP has won all 15 seats in the Parliament in the last two general elections.

“In other words, the minute I do that, the minute that the Governor General issued that proclamation for the dissolution of Parliament, I am no longer a representative, I will still be the Prime Minister… I am explaining to you what the process is, so very soon, very soon, it might be a little sleep and wake you don’t know, I will ask the Governor General to dissolve the Parliament of this country,” he told supporters in the parish of St Patrick where the party launched its candidates for St Patrick West and St Patrick East constituencies.

“I am making it clear tonight therefore, all constituencies get your canvas report ready, some say I am calling it in May, some say in June, some say when Santa Claus coming, well I am telling you that your election date will be announced soon,” said Mitchell, who traditionally announces the election date at a political meeting in a national broadcast.

Mitchell, one of the longest serving prime ministers in the Caribbean, has already hinted that the upcoming general election will be his last and the NNP is expected to face a rejuvenated opposition National Democratic Congress (NDC) that recently elected attorney Dickon Mitchell as its leader.

Prime Minister Mitchell is due to address the nation on Tuesday, two weeks after he promised to do so.