ST. GEORGE’S, Grenada – Prime Minister Dr. Keith Mitchell Wednesday predicted that his ruling New National party (NNP) will be victorious in the next general election, constitutionally due in 2023, brushing aside suggestions that he may call a snap election in Grenada. 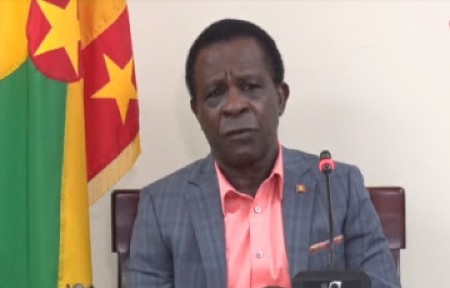 Prime Minister Dr. Keith Mitchell at first news conference for 2022 (CMC Photo)Mitchell, 75, who led the NNP to consecutive clean sweeps of the 15-member Parliament in the last two general elections, also indicated that the new leader of the party will be decided by supporters within the coming months.

Mitchell, speaking at his first news conference for the year, did not disclose whether or not he had a preferred choice for the leadership position insisting that this will be a decision to be taken by the party supporters.

“That question is to be answered by the people of the New National Party, the supporters. If I speak to say I want X, it is sort of like dictating because, given my influence on my political organization, it will be very difficult to see the freedom of people going to an alternative choice,” said Mitchell, who has been at the helm of the NNP for more than three decades.

“So, I will not want to do this, I will not tell anyone what to do, I have my views, I have seen my colleagues at different levels. In any event, let us accept this, I have said that in the period of the new term in government, assuming that we are re-elected, and I am confident of that re-election,” he said.

“I have said, that will be the period of transition, the process of transiting leadership is a continuous process, we have been doing that over the years. Who is to say, that suppose the people decide when the time comes that it is not just the people in government at the time should lead the NNP, it is open to supporters at all levels in the political organization,” said Mitchell, one of the longest serving head of government in the Caribbean Community (CARICOM).

“So, that is a point that we have to look at, there is a perception that we must choose somebody from instead the party in Government at this time, I don’t hold that view and I think members know that I have expressed those views consistently

“But, people are seeing, people know individual services over the years and they have that individual choice and the party will do that, one thing I will promise you, we won’t paratroop anybody into the NNP,” Mitchell.

He told reporters that the “person will have to show their mettle, they will have to come in and show some level of consistency of work and evolve through a particular process.

“That is what I could promise you,” he added.

The NNP is expected to face a challenge from the National Democratic Congress (NDC), which on October 31 last year, elected attorney, Dickon Mitchell as its new leader.

The party said that it has already started the process of selecting candidates to contest the next general election.