KINGSTON, Jamaica – Grenada’s Prime Minister,  Dickon Mitchell, says the region is experiencing a “fascinating time” as a progressive wind of political change is blowing throughout the Caribbean. 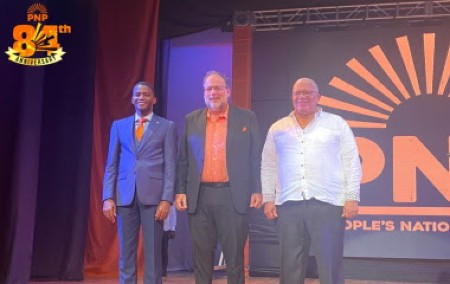 Addressing the Evening of Excellence” organized by the main opposition People’s National Party’s (PNP) on Thursday night, the 44-year-old Mitchell, an attorney, said “it is by no accident that the parties who are represented here tonight from the Caribbean are all progressive center left”.

The event, which formed part of the PNP’s 84th annual conference, is being attended also by representatives from the St Lucia Labour Party (SLP) and St Kitts and Nevis Labour Party (SKNLP) that won the general election on August 5.

Mitchell, the guest speaker at the event, said he has no doubt that the presence of the regional politicians “signals where the wind will blow”.

He said that the PNP has been instrumental in shaping Jamaican politics, noting that at 84, the party is older than Jamaica even as he cautioned about the challenges that this might pose.

“Eighty-four years of service to the people of Jamaica is a significant milestone and carries not only the pride of singular service but also encompasses the burden of future casting for relevance.

“We are gathered here tonight for this very purpose…connecting, sharing and building to ensure that past successes do not petrify into future complacency but are reimagined to satisfy the needs of our Jamaican, Grenadian and Caribbean society.

“It was merely a few months ago, that I too was in the seat of the opposition seeking to shift the status quo by offering new solutions to the challenges that plagued the Grenadian society for decades,” Mitchell said, adding that Caribbean leaders should aim to create a transformative vision for their countries, one where the past is acknowledged but is released to welcome the future.

“My decision to come here tonight was not without some pressure. Such pressure from across the Atlantic who called repeatedly to ask whether I’ll be jumping on a plane to go to another island to mark the passing of another event.

“To all young people out there, if you believe, work hard and dream, you can and will achieve.”

The PNP is staging its annual convention over the next three days culminating with a rally at the National Arena on Sunday.