Fresh on the Heels of His Election Loss, former PM of Grenada Vows to Play a Constructive Role as Opposition 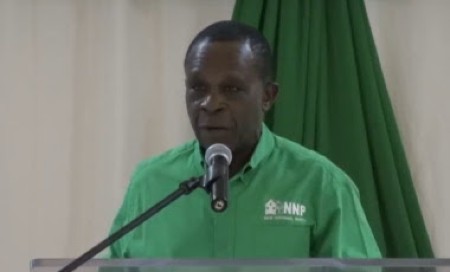 In a television broadcast, Mitchell, 75, said he is aware that there is a level of disappointment among the NNP supporters “because the results were not exactly what we wanted them to be.

“But inspite of that I am eternally grateful for all of your contributions. The support you have shown me in particular — not just during the campaign — but through all the years – has been remarkable.”

He said while the “sting of defeat hurts, we all have to remain engaged for the prospects of this nation depend on the contribution of each and every one of you.

“As a party, this New National Party will survive this current setback, as we still remain the perennial dominant force in national politics. This is underscored by the fact that in one of our worse nights we still got 28,959 of the popular votes, only 2,471 less than the winner.”

But he acknowledged that there is no doubt that the party has to “reform, reorganize and re-energize the movement.

“There is a need for review but no recriminations. But we will also have to be frank and honest in those deliberations. The reviews and the discussions have already begun and will no doubt continue in the immediate period.

“It must be clear we are entering a transitional phase,  and I see my fundamental role as facilitating a new emerging leadership that will ensure that the NNP remains at the vanguard of the people’s aspirations.”

Mitchell, who had been one of the longest serving prime ministers in the Caribbean Community (CARICOM) said that he will meet immediately with the new parliamentary caucus, namely the six members who were victorious.

He said meetings will also take place with the national executive “and we will continue to listen to the rank and file, and other well-wishers.”

In the broadcast, despite saying during the campaign that this would have been his last general election, Mitchell hinted at not stepping down in the near future, saying “as leader, it is my responsibility to ensure that the party remains strong and viable, and always ready to take up the mantle of governance again”.

He said he had spoken to the new prime minister “and so we are willing to give the new government support in promoting policies and programs that will be for the benefit of the nation.

“We shall play a constructive role as Opposition, understanding that any opposition will be on philosophical issues that we think might be in the better interest of the country.

“While we understand every new government will come with different ideas and approaches, we are urging the new administration to positively consider not dismantling programs that especially benefit ordinary people the most.

}We must always stand up and look out for what the bible describes as the least among us, and that shall be our foremost mission now and forever,” Mitchell said in his broadcast.