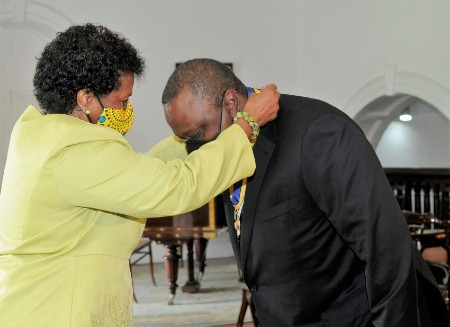 “It is a moment for me of great pride and joy to be able to receive this honor, which I say, I feel I’ve received not just on my own behalf, but on behalf of my country and countrymen and women, but also on behalf of the continent as a symbol really, of the coming together of our two regions and the working together of our two regions. So, for me personally, it’s a moment of great pride and joy,” Kenyatta said.

President Kenyatta was conferred the accolade of Honorary Member of The Order of The Freedom of Barbados for his outstanding accomplishment as a global leader, his commitment to enhancing global trade and sustainable development and efforts to strengthen the bonds of cooperation and friendship between Kenya and CARICOM, in particular the bilateral relationship between Kenya and Barbados.

Prime Minister Mia Amor Mottley, who was present for the ceremony, noted that it was fitting that a man whose first name means freedom, received the Freedom of Barbados Award.

She said Barbados wanted to recognize the extraordinary efforts of President Kenyatta who had been “in the forefront of bringing a lot of the policies used together” for Africa, Caribbean and the Pacific (ACP) states.

Kenyatta expressed thanks to the Governor General, Prime Minister Mottley and the people of Barbados.

Kenyatta is the fourth President of Kenya, and has been in office since 2013.