Tallahassee, FL —Governor Ron DeSantis’ assault on voting rights and attempts to eliminate Florida’s Black congressional districts has the Congressional Black Caucus preparing to hold a hearing in Tallahassee on April 13. The inquiry will help determine the next step in the fight against what is being described as an all-out assault on African American participation and representation in the political process. 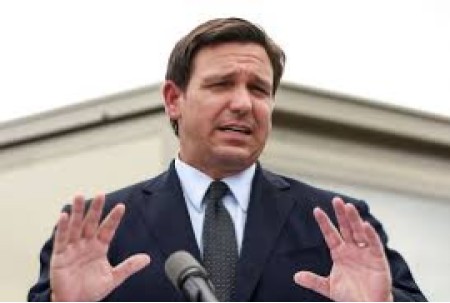 Gov. Ron DeSantis, (R) Florida DeSantis vetoed a legislative redistricting map that failed to dismantle a minority North Florida district held by US Representative Al Lawson. The governor is feuding with his own Republican lawmakers who resisted his plan while Lawson continued to call him out for waging an all-out “assault” on African Americans. “The fact that DeSantis justifies his goal to create racial disparities in congressional representation by citing the constitutional amendment created following the Civil War for the very purpose of remedying those same disparities is absurd and will be soundly rejected by any credible judge,” Lawson said.

In 2010, Ellen Freidin, who led the successful constitutional amendments 5 & 6 effort to prevent gerrymandering in Florida, pointed out that Governor DeSantis is in fact violating those laws. “Apparently, Gov. DeSantis believes that trampling on rights of minority voters and turning back the clock to ignore those rights will enhance his standing with Florida and national voters.’’ DeSantis has caused more chaos in the tumultuous redistricting process by trying to bully lawmakers into adopting his plans. Congresswoman Val Demings represents the other district DeSantis wants to undo.  Demings is running for the US Senate against Republican incumbent Marco Rubio.

The governor has called a special session with hopes that the Republican state legislature draws maps to his liking.  If not, the Florida Supreme Court will have to draw the district boundaries. Time is the enemy of the process now that the redo is necessary because candidates have no districts to run in.

In a stunning ruling, federal Judge Mark Walker struck down several parts of Florida’s 2021 election law saying, parts were included “with the intent to discriminate against Black voters.” Florida is the first state among the nationwide republican effort to block plans that dilute and minimize the Black vote. The controversial law limits dropbox use of intimidating language in voter registration applications and prohibits handing out food or water in long lines to vote. After detailing Florida’s long history of impeding the Black vote, Judge Walker went even further by utilizing the Voting Rights Act preclearance that prohibits the state from making any changes to election law for 10 years without court approval.

Charlie Crist, the leading democrat challenging DeSantis has blasted the law and praised the court decision. “The real partisan political intent was clear, to suppress the votes of seniors and minorities. Today’s verdict is a win for our democracy and a loss for the DeSantis anti-voter agenda.”

DeSantis plans an appeal, but time is not on his side. The scathing 288-page decision raises serious questions about the law’s attempt to suppress Black voting rights.