NEW YORK, New York – Early voting got underway on Saturday for a seat in Brooklyn, New York vacated by former New York State Assembly Member Nick Perry, who earlier this week was sworn in as the first Jamaican-born national to be United States Ambassador to Jamaica. 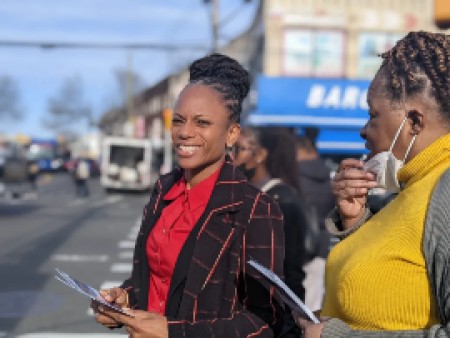 A lifelong resident of the Brooklyn neighborhoods of East Flatbush, Canarsie, Crown Heights and Brownsville, Chandler-Waterman said her record of activism spans two decades. (Photo by Ariama C. Long)Perry, who for almost three decades represented the 58th Assembly District in Brooklyn, has supported community activist Monique Chandler-Waterman, the daughter of Jamaican and Barbadian immigrants, to succeed him.

Chandler-Waterman is challenged by another Caribbean American, Hercules Reid, who traces his roots to Jamaica, in the May 24th Special Election.

Early voting in that poll runs from Saturday through Election Day.

“We’re on the path to victory, and, with your help, we’ll get Monique over the finish line,” said Chandler-Waterman in a message to potential voters on Friday, adding that her campaign is “building momentum.”

She said her story is “one of service – as a public servant, advocate and activist.”

He said her “tireless, community-first approach” has been a theme throughout her life, forming multiple block associations and founding a nonprofit.

In addition, Chandler-Waterman said, as an activist, she has been working to reduce crime and boost public safety. 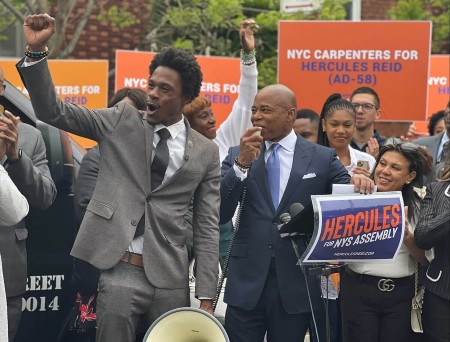 She also said she had been a public servant working in the offices of Perry; former New York City Council Member Jumaane Williams, the son of Grenadian immigrants, now New York City Public Advocate; and on the frontlines of the COVID-19 pandemic in the New York City Test & Trace Corps.

“Teachers are the lifeblood of our community,” Chandler-Waterman told the Caribbean Media Corporation (CMC). “Throughout my years serving this district as a public servant, advocate and activist, my work has been focused on supplementing the great care, education and development our sacrificing educators impart on the students of the 58th District.

“I welcome the members of the United Federation of Teachers and the New York State United Teachers to this campaign, and could not be prouder to have their support,” she added.

“Monique Chandler-Waterman is a proven leader, and I know she’ll be a strong representative in Albany for the people of the 58th Assembly District,” said Reynoso in his endorsement. “Over the years, I’ve known Monique, I’ve seen her dedication to public service and aiding the most vulnerable members of our community.

“I know she’ll continue that work in the legislature, and that is why I am proud to endorse her run for the State Assembly,” he added.

“She is a natural leader in every sense of the word, and her roots go deep in this community,” he told CMC.

“Monique is the best of us, and she will fight to make sure everyone has access to quality public schools, affordable housing and community-based health care,” he added.

Reid, on the other hand, said that during the week of May 14th – 22nd and leading up to the Special Election on May 24th, he will be speaking to constituents on the streets, at their doors and over the phones “to secure their vote.”

“My goal is to empower our community and expand our opportunities and resources,” the told CMC on Friday.

Adams and Reid rallied together with supporters Wednesday morning.

In early April, New York Governor Kathy Hochul issued a proclamation declaring that a Special Election will be held on May 24th to fill the 58th Assembly District seat vacated by Perry.

“Ambassador Nick Perry has led an illustrious career, and, with his distinguished appointment, he continues his trajectory forward,” the governor said. “We wish him all the best in his new role as US Ambassador to Jamaica.

“New Yorkers deserve to be represented in the fullest capacity, and an election to fill the ambassador’s seat is necessary to ensure their voices are heard,” Hochul added. “I look forward to working with the next elected leader and encourage people living in the 58th District to get out and vote.”