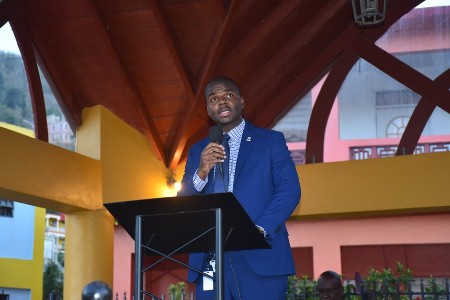 Dr. Natalio WheatleyFahie, 51, was arrested last Thursday during a sting operation at the Miami-Opa-locka Executive Airport, along with the managing director of the BVI Ports Authority, Oleanvine Maynard and her son Kadeem.

On Wednesday, a United States judge ruled that Fahie can be released on a US$500,000 bond pending his trial on cocaine trafficking conspiracy and money laundering conspiracy charges, despite a prosecutor’s arguments that he should face pre-trial detention.

Fahie would have to remain in monitored confinement in his daughters’ apartment, Judge Alicia Otazo Reyes of the US District Court for the Southern District of Florida ruled.

Wheatley had proposed the resolution on behalf of the new National Unity government that states members lack confidence in Fahie.

The resolution noted that Fahie, who was appointed premier following the 2019 general election, had been arrested and charged with money laundering and conspiracy to import a controlled substance into the United States.

It said also that the arrest and the charges against Fahie had brought “the integrity and sanctity of the role of the premier to public and international disrepute and demonstrates a lack of character and suitability to operate in a public leadership role and manage the affairs of this government”.

The resolution noted that the “charges and the ongoing investigations and trial will undermine the international confidence and reputation of these Virgin Islands” and that Fahie has “not stepped down as premier and remains in custody outside the Virgin Islands and unavailable to perform his functions and lead the government”.

The resolution indicated that the Virgin Islands Constitution Order 2007 provides that “If a motion on the Order Paper that the House of Assembly should declare a lack of confidence in the Government of the Virgin Islands receives in the House the affirmative votes of a majority of all the elected members of the House, the Governor shall, by instrument under the public seal, revoke the appointment of the Premier”

“Now therefore be it resolved by the House of Assembly of the Virgin Islands that it does declare a lack of confidence in the government led by honorable Andrew A. Fahie”.

Wheatley said he had noted the concern voiced by members of the financial services and tourism sectors about the future of the territory.

“It does not mean that I condemn him, but it means that he in his private moments will have to pray to the lord and ask for repentance.  He will have to accept the consequences of his actions,” Wheatley said.

Wheatley was recommended to replace Fahie by other elected officials and Governor John Rankin, confirmed him as the new premier. He was later sworn into office.

Meanwhile, Britain’s Minister for Overseas Territories, Amanda Milling, said she appreciates that recent events in the BVI with the arrest of Fahie have been “shocking and concerning for everybody”.

She also acknowledged that the report of the Commission of Inquiry (COI) that examined allegations of corruption and abuse of office by elected and statutory officials, had also raised very serious concerns about the failures of governance and dishonesty by elected officials.

“This is a challenging time for the people of the British Virgin Islands,” Milling said in a statement, adding that she had spent the last few days listening to how Virgin Islanders felt about the events.  “We discussed the recommendations from the Report. And I heard what you think is needed – which is putting the best interests of the people of the BVI at the heart of any future decisions.  Events are moving quickly and I would like to provide a short update on my trip and outline what will happen next.

“Let’s be clear – the Report highlighted significant concerns around corruption, transparency and accountability. There is no getting away from this.  Like many people have told me. This isn’t a question of whether something should be done. It is a question of what is done.

“Action is needed now to: strengthen the foundations of the Territory; deliver a better public service; maintain a strong and resilient economy; and create better opportunities for the people of the BVI,” Milling said, adding “this is what I heard you want during my visit.

Rankin had said that the Commissioner had recommended “a return to Ministerial Government and an elected House of Assembly as soon as practicable, with the Governor taking regular advice from the Advisory Council and others on the earliest practicable date on which such government can resume.

Rankin said overall, the Commissioner in his Report finds that the elected government, in successive administrations, “has sought to avoid good governance” and that “in terms of governance the people of the BVI have been served very badly in recent years and that almost everywhere the principles of good governance such as openness, transparency and the rule of law are ignored.

“He concludes that it is highly likely that serious dishonesty may have taken place across a broad range of government and that there is information that a substantial number of elected officials may be involved. He makes recommendations for further investigations and possible criminal prosecution in several areas.”

The Governor said that the COI made 45 specific recommendations on how to address each of the areas of concern that his report identifies.

In her statement, Milling said that “there is an urgent need to fix the systems, processes, laws and norms to ensure that money spent by the government – your money – is better spent on roads, education, hospitals and better public services and not misused as the COI has found.

“We now have the opportunity to do this.  To build a government that delivers for its people in a fair, transparent, and accountable way.

“As I return to the UK I have a lot to consider. I will share the feedback from the range of individuals and groups I have met with the Foreign Secretary, and we will discuss what steps to take next,” she said, adding that she would be speaking with Ranking and Wheatley “on how to tackle the issues which are holding back the development of the BVI.

“This must happen quickly.  The people of the BVI deserve no less.  You deserve a government which works in everyone’s interests, not just those of a few.

“A system which promotes and protects, not divides and instils fear. A future which is bright, not overcast by the dark shadows of crime and corruption. I am committed to delivering this in the interests of the people of the BVI.”

But leaders of the Organization of Eastern Caribbean States (OECS) to which the BVI has associate membership, has condemned the move by London describing it as “a retrograde step”.

In a statement, the leaders of Antigua and Barbuda, Dominica, Grenada, St. Lucia, St. Vincent and the Grenadines, St. Kitts-Nevis and Montserrat said they had taken note of the position taken by the duly elected BVI government “which, while welcoming the recommendations arising from the Inquiry, rejects the intention of the British government to impose direct rule on the BVI.

“It is clear to us that, in principle, it is ill advised to impose direct colonial rule and the history of such imposition in the Caribbean has never delivered the desired result,” the OECS said in the statement.