Dr. Fuad Khan Challenges Persad-Bissessar for Leadership of the Opposition Party in Trinidad 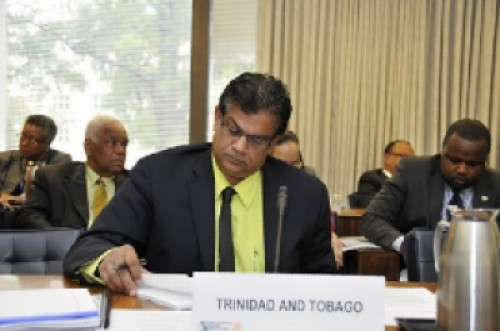 Dr. Fuad Khan. (Courtesy PAHO.org)“Yes, I have the receipt which shows I have filed my papers. I have filed for the post of political leader of the UNC,” Khan told reporters as the party gears for internal elections on June 28.

“They feel the leader can serve the party and country better by focusing all of her energies with her work in the Parliament as Opposition Leader, while there is another person who will embrace fully, the role of political leader to steer the party and give it the proper guidance it needs,” he added.

Khan, who served as health minister in the2010-15 People’s Partnership government  led by Persad-Bissessar, s promising that if he emerges leader of the party, his priority will be to embrace all the membership, including those who have been ostracized by the current leadership, for their perceived loyalty to the party’s founder and first political leader, Basdeo Panday.

“My symbol for this elections is that of a smiley face, which symbolizes happiness and all-inclusiveness. I want to bring those who have been ostracized back into the party fold. The others, their symbol is a star, and this star is that of a celebrity, which you have to bow down to,” Khan said.

Persad Bissessar and several other UNC members, including opposition member, Dr. Roodal Moonilal on Sunday filed their nomination papers for the internal elections.

Moonilal is seeking to become one of three deputy political leaders.

Vasant Bharath, who contested the last internal election for the post of political leader, said he would not be contesting this election, saying he would not participate in any sham election and that the party’s constitution is not being upheld.

“It’s a complete trampling of the party’s constitution. The constitution is clear on how the elections are held. It’s done separately for the continuity of leadership if a new national executive come sin,” he told reporters soon after Persad Bissessar had announced the date for the internal elections last month.

“I have no intention of being a part of this because it would legitimize this sham process,” he added.