ROSEAU, Dominica – Dominica has reiterated a call for the United States to remove its decades’ old trade and economic embargo against Cuba as a Cuban diplomat here predicts “one day we will celebrate the end of the blockade”. 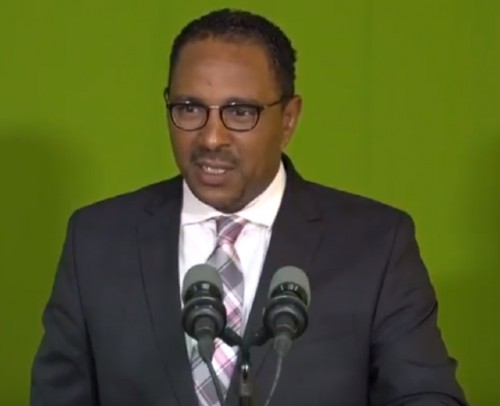 Foreign Affairs Minister, Dr. Kenneth Darroux (File Photo)Foreign Affairs Minister, Dr. Kenneth Darroux, addressing a weekend motorcade and rally organized by the Dominica-Cuba Friendship Association, said “while we recognize the efforts of the US government in recent days to increase flights to some cities in Cuba,…and also some headway in the remittances allowed to Cuba and now visas can be processed in Cuba, we are saying thanks…a lot more can be done.

“Cuba needs to have a seat at the table,” said Darroux, noting that most of the measures were being implemented unilaterally by Washington, insisting “Cuba needs to be there when Cuba is being discussed.

The United States embargo against Cuba prevents American businesses, and businesses organized under U.S. law or majority-owned by American citizens, from conducting trade with Cuban interests. It is the most enduring trade embargo in modern history.

The US first imposed an embargo on the sale of arms to Cuba on March 14, 1958, during the Fulgencio Batista regime and on February 7, 1962, the embargo was extended to include almost all exports. The United Nations General Assembly has passed a resolution every year since 1992 demanding the end of the US economic embargo on Cuba, with the US and Israel being the only nations to consistently vote against the resolutions.

Darroux told the rally, it was also vexing that Washington should be describing as terrorists members of the Henry Reeve Brigade, the international contingent of doctors specialized in disasters and serious epidemics that was awarded the prestigious 2017 Dr Lee Jong-wook Memorial Prize for Public Health at a World Health Assembly (WHA).

“They have been labelled as state-sponsored terrorists by the US government. Can you imagine that? People who leave their homes and families to assist countries like ours in times of need they have been labelled by the US government state-sponsored terrorists. We are also asking that Cuba be removed from that list and be removed right now,” Darroux said.

Cuba’s Ambassador to Dominica, Ulisis Aranz Fernandez, who also addressed the event, said worldwide condemnation of the blockade has been increasing.

He said since 1992, the UN has approved a resolution calling for the end to the blockade. He said in the last vote at the UN, 184 countries voted in favour of removing the trade and economic embargo while the US and another country voted against and three abstained.

He said last month, rallies and motorcades took place in 24 cities around the world “including New York and Miami calling for the removal of the blockade.

“Our people and our government will be eternally grateful to the people and government of Dominica for joining us in the battle to end the economic, financial and commercial blockade by the Us government and for defending the sovereignty and independence of Cuba.

“One day we will celebrate the end of the blockade because we are sure that the global battle to eliminate the blockade will bear fruits,” the diplomat said.

President of the Dominica-Cuba Friendship Association, Dr. Damien Dublin said Cuba has played a significant role in the socio-economic development of the island, noting the impact of Cuban trained local professionals operating here.

“We have graduates in all spheres and the good thing about Cuban graduates they return to contribute,” he told the rally, adding “that’s why we stand resolute today in solidarity with Cuba”.