ROSEAU, Dominica – Prime Minister Roosevelt Skerrit Friday said Dominica has not established diplomatic relations with Syria, even as he acknowledged that “earlier this week” he had been informed of that situation by Foreign Affairs Minister Dr. Kenneth Darroux. 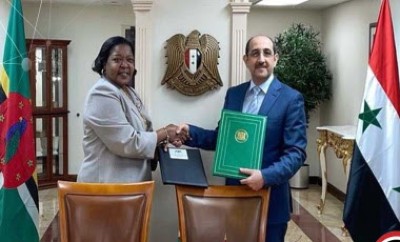 In a radio and television broadcast, Skerrit said he had been informed by Darroux that “ a signing ceremony had taken place effectively establishing diplomatic relations” between the two countries.

“The Minister himself made clear in correspondence to me that he was not party to the signing and indeed was fundamentally opposed to the move at this time,” Skerrit said, adding “these were my immediate sentiments as well”.

Skerrit said that in his response to the Minister on Monday “ I registered my absolute bewilderment by this development.

“I went on to indicate that this matter was troubling on several fronts and it needed to be explained as a matter of urgency,” Skerrit said, adding that the management of sensitive matters of government requires “what is normally referred to as due process.
“You cannot just read something on social media or hear something in passing and rush to judgement or action. There are several established norms or behavior that are required in the execution of one’s duty as prime minister of a country,” Skerrit said, noting that this is not the case for the opposition.

He said when this situation was brought to his attention on Monday, he immediately gave instructions for the Bannis Roberts, island’s ambassador to the United Nations to be summoned “to an urgent in-person meeting in my office yesterday, Thursday…

“This was the earliest practicable time as the first available direct flight from the United States would have been on Wednesday,” he said, adding that the meeting was also attended by relevant officials as well as four senior government ministers and legal counsel.

He said the meeting lasted two hours and examined the circumstances that would have led to the signing of the diplomatic agreement.

“I should point out here that no existing laws were broken. There was nothing unlawful about the act of the ambassador, he said, noting however that diplomatic relations could only be discussed with a foreign country on the basis of a Cabinet note or by a foreign government writing officially.

“For the record, neither the Minister or the Ministry of Foreign Affairs gave instructions or did they express interest in r desire to pursue establishment of relations with Syria at this or any foreseeable time” Skerrit said in the broadcast.

“We have all have watched in horror, and observed social, political and indeed heinous developments in Syria. Such a decision would therefore not have been taken without due consideration. It was therefore quite surprising when we learnt of the signing of the relevant documents by the ambassador and it is for this reason that I gave clear instructions for the ambassador to be summoned…”

He said that the diplomat was permitted to explain her reasoning for signing the agreement at the meeting and at “the end of the session it was apparent and indeed evident that there was a clear lapse of judgement on the part of the ambassador to have proceeded with the signing of such documents without consultations with the Minister and the Ministry of Foreign Affairs”.

Skerrit said he would not use his broadcast to comment on the situation in Syria, “but suffice to say the government I have the honor to lead was, and is still not in support of establishing or pursuing relations with Syria under the current circumstances”.

He said following the meeting he has instructed that the Ministry of Foreign Affairs dispatch communication to Syria outlining the policy of his administration and that the documents signed establishing diplomatic relations be considered “suspended indefinitely”.

He said Bannis Roberts has formally tendered her resignation “and I have accepted that resignation” and that the resignation takes effect May 31 and that she would proceed on leave effective today.

“The matter of the establishment of relations with Syria was a lapse of judgement on the part of an individual and it has now been dealt with in a manner universally followed and accepted,” Skerrit said, adding he will soon announce her replacement.