Debate on New Government Budget to Begin on April 22

BELMOPAN, Belize,–Opposition legislators are expected on April 22 to respond to the BDZ$1.030 billion (One Belize dollar=US$0.49 cents) national budget that Prime Minister John Briceño presented to Parliament over the last weekend. 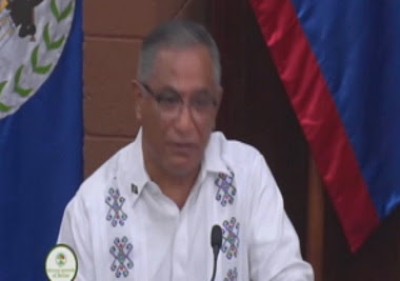 Prime Minister John Briceno delivering budgetThe five-member opposition, led by former education minister, Patrick Faber, had walked out of the National Assembly following the use of an offensive remark made by government legislator, Julius Espat.

In rising on a point of order, Faber, the new Leader of the Opposition was referred to as a boy.  The term, while belittling when referring to an adult male, also carries a racial connotation depending on its use.  It was enough to trigger a walkout when the Speaker of the House did not get Espat to apologize for the pejorative language.

Briceño, who presented his fist fiscal package since coming to office late last year, said he expects that the two-day budget debate to underscore the need to move “the economy decisively to a sustainable foundation, so that we can reduce the deficit, and thus lower the need for borrowing.

“These financial year 2021/22 forecasts of revenues and expenditures are tethered to reality, not to political showmanship. And this is belt-tightening that is necessary, I reiterate, because of the United Democratic Party (UDP) mess that we have inherited.”

The government said that the adjustments made in the movement towards a balanced budget are spread as evenly as possible and are shared equitably so that no one sector or group of people suffers disproportionate pain.

“Thus, it will be evident that reductions are being made to all recurrent spending lines, to wages, to goods and services, to transfers and subsidies and to debt servicing payments, in as tolerable proportions as possible,” Briceno said.

He said that priority will be given to spending in the areas of health, poverty mitigation, education, citizen security, rural development and of course, the maintenance and development of the infrastructure of the National Logistics Network.

“Giving everyone a fair shot at prosperity, more so because of the inequities in society that the extant crisis has compounded, is our urgent duty. A recent regional study has illustrated that failing to do this, will “raise polarization, erode trust in government or [cause] social unrest.”

“Upon this principled scaffolding, we proceeded to build the budget for this fiscal year, which projects total revenues and grants of BDZ$1.030 billion, an increase of 14.5 per cent compared to the projected outturn for financial year 2020/21,” he told legislators.

“I wish to underline the fact that every category of spending will fall compared to last year’s budget. On the Capital spending side, total investment will be BDZ$298.6 million, adding that the budget will be financed 186.2 million from our development partners on concessional terms; and

“In this budget, the salaries and pensions of public employees will constitute 64 cents of every dollar collected by government, and the costs attendant to their work, such as utilities, fuel, travel, etcetera, account for another 18 cents of each dollar.

“That leaves just 18 cents of recurrent revenue, some BDZ$176 million, to make all our interest payments that are due on BDZ$4.2 billion of accumulated debt, to fund all capital investment programs and to settle principal repayments.”

Briceno said that rebuilding the edifice of the public finances on solid rock, means that his government has to borrow less each year, starting now with a reduction of almost two per cent of gross domestic product (GDP) in overall financing for this Budget.

“And this administration will have an unwavering commitment to a balanced budget, at the primary level, for Fiscal Year 2022/2023 — with the further aim to lift that primary to about two per cent the following year and by fiscal year 2025/2026 to carry forward a primary surplus of no less than three per cent of GDP.

“I am confident that these ambitious targets are attainable, because we did it before: the last two Peoples United Party (PUP) budgets for fiscal year 2006/2007 and 2007/2008 featured primary surpluses of 3.85 per cent and 3.25 per cent, respectively,” he said.

He said that despite the belt tightening, the budget will preserve employment for 15,000 public servants, 4,900 of whom contribute to domestic and border security, while another 3,500 serve over 100,000 students throughout the education system and the other 6,600 who are on duty across the multiple departments and agencies of the national Government.

“In a sense, these 15,000 public servants have 405,000 full-time customers, who are the other citizens of Belize, as well as many thousands of part-time customers, those who reside in invest in and visit Belize. Their work, paid for by all taxpayers through the appropriations in this budget, vivifies the State, enabling the quality of life and many conveniences that all Belizeans share.”

Briceno said that his government has resisted retrenchment and protected the wages of those earning up to BDZ$12,000 per year, adding “thus, no one earning BDZ$250 a week or less will face a salary cut thereby ensuring that no government employee well fall below the five dollar an hour minimum wage.

“The proceeds of this budget will service our national debt, both interest and principal repayment — presuming that new terms will be agreed upon for the super bond.”

He said among the capital spending considerations include BDZ$15 million for the continued battle against the coronavirus (Covid-19), BDZ$10 million for 238,800 additional vaccines to be acquired on discounted terms through the COVAX facility, three million dollars or the ongoing food assistance program and BDZ$60 million for the Coastal and Caracol Highways.

In addition, BDZ$3.5 million will go towards new housing programs and low-cost housing support as well as three million dollars for improvements to sugar roads and other agricultural roads.

The government has also said that more than BDZ$100 million dollars in additional capital investments designed to foster growth and efficiency, to alleviate the conditions of poverty, and to advance what the eminent labor economist and author Richard Layard labels “life satisfaction.”

Briceno said that what his government is addressing “is 13 years of UDP-induced foundational rot and decline, capped by the Covid pandemic.

“This compromised structure, as full as it might be of underlying potential for greatness, is now being buffeted by a rolling calamity, hitting us in surges, each surge finding us weaker and more vulnerable.

“Those before us had no concern for tomorrow. They left the public finances on life support, with barely a pulse,” he added.