Dale Holness ended his one-year term as Broward County Mayor in November 2020 and stepped back into the role of County Commissioner serving District 9. And, living up to his title ‘the hardest working Broward county commissioner, Holness continues to build on his accomplishments for the constituents he serves. A well-loved local politician who has been fighting for equity in housing, healthcare, financial wellbeing, many see his political trajectory taking him to higher office. And so does he, but he is taking steps with caution. 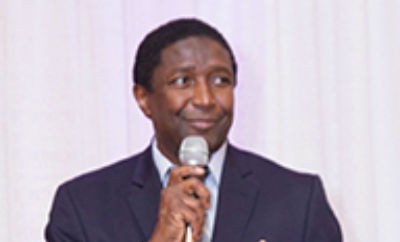 In fact, a number of seats in the US congress is coming up for re-election in 2022, so opportunities are rife. However, the congressional seat occupied by Alcee Hastings, who represents the state of Florida, has not been officially declared open. But, some have already filed to run for Hastings’ seat. However, Holness is adamant that he is not running for the seat at this point in time, but instead preparing himself if and when the seat becomes available.

“I am not going to come out in front of him,” said Holness, adding that a couple of people have already filed for the seat and are being criticized for doing so.

“I will wait until Congressman Hastings makes his decision as to what he is doing before I make any decision. Out of respect for him, out of honour for him in the service that he has rendered to our community for the past 30 years,” the Commissioner said.

The longest serving Congressman for the state of Florida, Hastings is now in his 14th term. Holness seeks to learn from him as he looks beyond his Commission role.

“I’ve worked with him very closely, especially on immigration issues for our people… We can learn from his vocal stance and support for the people in his district. And, though some people may complain about nuances here and there, the fact is when it came for someone to stand up for immigrants, he’s been at the forefront. Whether it be TPS for Haitians, or to ensure that our system looks to get those who are here out of status fully integrated into America, he’s been there,” said Holness.

Right now, his focus is on building and maintaining better and stronger communities in Broward county. Holness outlined his fight for racial parity through the Racial Equity Taskforce he created last year.

The Taskforce has been charged to look at all disparities that exist and figure out how to make meaningful change. Motivated by the city’s Finance Office 2020 research that revealed the country lost $16 trillion in GDP because of racial inequalities in America, Holness, the Taskforce, and partners are keen to address the systemic issues at the core of these statistics.

“I think this will be a model for many others to utilize. Because what we did with this Taskforce is we didn’t just make it a governmental thing. We have Broward Workshop, which is 110 of the largest most powerful businesses in Broward County. The legislation require that they get at the table. It also requires that Chambers of Commerce be represented,” Holness confirmed. Also involved are Public/Private partnerships, the NAACP, Urban League, Black Lives Matter, Florida New Majority, Hispanic Unity, the Hospital District, the School Board, Broward College Holness added.

Part of Holness’ push for racial equity resulted in the creation of the Police and Criminal Justice Oversight Board that will look at criminal justice, abuse, sentencing, and charges by the State Attorney’s office. And with this, instituting a dashboard that allows ordinary citizens to see and interact with local law enforcement has build transparency into the system. These initiatives, as well as others, is what’s driving Holness, and his constituency wants to see him rewarded.

“They (constituents) are saying, if there is an opportunity for you to serve somewhere else we would like to see you take advantage of that opportunity, and that they will support me. There is a groundswell of people who have reached out to me to encourage me to seek higher office. But, as of right now that decision has not been made by me. We’ll look to see what the possibilities are and how I fit in,” Holness declared.