NEW YORK, New York – Caribbean American Democratic Congresswoman Yvette D. Clarke has joined her New York colleagues Congresswoman Grace Meng and Congressman Ritchie Torres in lauding a US court ruling striking down a restrictive mandate requiring diversity visa applicants from the Caribbean and other places to obtain passports before they could enter a lottery to apply for the US Diversity Visa Program. 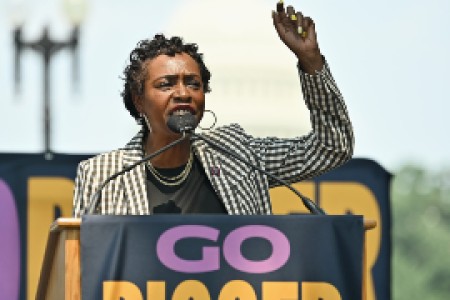 Caribbean American Democratic Congresswoman Yvette D. Clarke at Go Bigger on Climate, Care, and Justice! on July 20, 2021 in Washington, DC. (2021SHANNONFINNEY/Getty Images North America)The legislators said in a joint statement that the court ruling that struck down a restrictive Trump era regulation is welcome news, especially for those seeking fair passage to America.

“When we, along with 46 of our colleagues, wrote to Secretary Anthony Blinken in November urging him to either rescind or amend the Diversity Visa Program and remove the unnecessary restrictions of the Passport Rule, this was the outcome we were seeking,” they added.

The US congressional representatives said the ruling handed down by Washington US District Judge Timothy J. Kelly is “the right one that will make it less burdensome to participate in the Diversity Visa Program, as well as restore the symbolism and spirit in which the Program was enacted; to encourage immigration”.

“We are a nation of immigrants and diversity is not just our strength, it is our superpower,” said Clarke, Meng and Torres. “It is a fundamental understanding of our commitment to human rights. And so, we are grateful for this ruling that will undoubtedly make it easier to accept newcomers, not harder.”

The Diversity Visa Program was originally created, within the US State Department, to grant visas to countries with low immigration rates to the United States.

The Trump administration made many unsuccessful attempts to end the Program all together.

However, it was successful in including more restrictions and hurdles for applicants.

Clarke, Meng and Torres said that, by way of the unnecessary requirements of the Passport Rule, applicants from developing countries, such as those in the Caribbean, have been too restricted and overburdened to participate in the Diversity Visa Program.

“This has significantly undermined access to the Diversity Visa Program,” they said.

Clarke, the daughter of Jamaican immigrants, who represents the 9th Congressional District in Brooklyn, New York, said the unnecessary restrictions imposed by Trump also “tarnished the symbolism and spirit in which the Program was enacted.”

“Because the chances of winning the lottery are very low and the financial burden is disproportionately high, this rule affects millions of applicants discouraged from applying due to the costs associated with obtaining a passport they may never get to use,” she told the Caribbean Media Corporation (CMC). “We are a nation of immigrants and diversity is not just our strength, it is our superpower. It is a fundamental understanding of our commitment to human rights. And so, we must make it easier to accept newcomers, not harder.”

Meng said the Diversity Visa Program has been “a long-standing initiative in our country, promoting a core value that our nation was founded on; that people from all backgrounds can come to the US in search of a more prosperous life and to achieve their American Dream.

“But the Trump administration, fueled by its anti-immigrant agenda, implemented the Passport Rule that placed massive financial burdens on immigrants by requiring applicants to obtain a passport before they are able to enter the Diversity Visa lottery,” she said. “This Rule is unconscionable and antithetical to the original intent of the Diversity Visa Program.

“We are a nation founded by immigrants and a nation made stronger by its diversity,” Meng added. “Requiring potential applicants to hold a passport prior to applying for the Diversity Visa lottery only acts as a deterrent to millions of potential new Americans.”

“It is incumbent upon the Biden administration to rescind all of the last administration’s harmful policies,” he urged. “The repeal of the Passport Rule to the Diversity Visa Program is yet another important step in reversing racist policies and restoring our commitment to human rights.

“As a global leader we must enact policy that reflects our values of inclusivity and diversity,” Torres added.