PORT OF SPAIN, Trinidad – Christine Carla Kangaloo was elected as the President of Trinidad and Tobago on Friday, succeeding outgoing head of state, Paula Mae Weekes, and in the process becoming the second woman to be elected to the position. 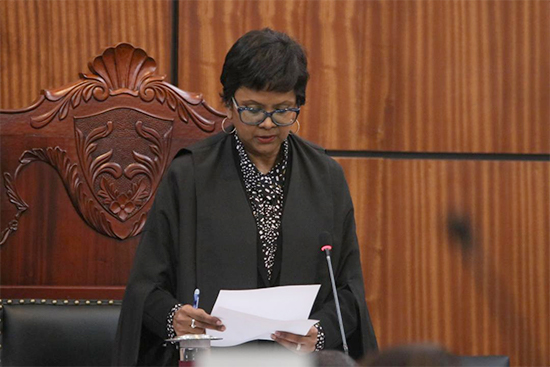 Christine Kangaloo - Photo courtesy of the Trinadad and Tobago Office of ParliamentKangaloo, who resigned her position as Senate President earlier this week and was nominated by the government, easily defeated veteran Senior Counsel, Israel Khan , who had been nominated by the main opposition United National Congress (UNC).

The Electoral College, which is composed of all members of the House of Representatives and the Senate assembled together, took just over two and a half hours to vote in support of Kangaloo, by secret ballot.

The government has 38 votes in the College, while the opposition has 25. There are nine independent legislators. The Presiding officer also has a vote.

When the results were announced, Kangaloo received 48 votes, Khan received 22 votes and there were three rejected ballots.

The Presiding Officer, Bridgid Annisette-George, who is also the Speaker of the Parliament, said under the Constitution, “the candidate who has obtained the greater number of the votes cast shall be declared elected.

“Accordingly I hereby declare that Christine Carla Kangaloo has obtained the greater number of votes cast and as such is elected as the President of the Republic of Trinidad and Tobago,” she said, adding that the necessary instruments would be sent to the President elect later.”.

Prime Minister Dr. Keith Rowley in nominating Kangaloo, said that the former government minister, university lecturer, had during her tenure as President of the Senate, acted as President of the Republic of Trinidad and Tobago no fewer than 33 occasions.

“It is with a sense of great pride that as Member of Parliament for Diego Martin West and along with all other members who signed or otherwise endorse her nomination that, as Prime Minister of this Republic that I present Ms. Christine Carla Kangaloo as a most worthy candidate for the consideration of this esteemed Electoral College to be elected to the position of President of the Republic of Trinidad and Tobago,” he said.

Following her election, he said the “well written constitution of Trinidad and Tobago has functioned” properly, a reference no doubt to the claims made by the opposition during the run up to Friday’s presidential election that Kangaloo was an active politician and should have stepped aside for another nominee.

“Madam Speaker we were called to duty under the provisions of the relevant sections of our Constitution to elect a head of state and today we did so smoothly, dutifully,” he said, adding that “public service is honorable and it is in that vein I would like to congratulate the citizens who put their names forward to be considered for the post of President of Trinidad and Tobago.

“It was an electoral process and Madam Speaker we can still be proud, not knowing of a better way to do it and out of this process…this Chamber by clear majority has chosen a distinguished daughter of Trinidad and Tobago”.

In her brief remark, Opposition Leader, Kamla Persad Bissessar said she has “taken note of this electoral process and I serve notice that the opposition will hold that office to scrutiny in the best interest of the people of Trinidad and Tobago”.

Kangaloo is the only person to serve as both President and Vice President of the Senate. She becomes the seventh head of state and Commander in Chief.