GEORGETOWN, Guyana – China’s Ambassador to Guyana, Guo Haiyan, says a documentary by a US-based media outlet, VICE News is intended to smear relations between Beijing and Georgetown and that trade between the two countries has grown by 213 percent over the past five years, reaching US$710 million in 2021. 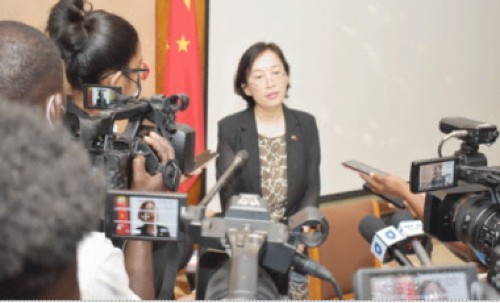 China’s Ambassador to Guyana, Guo Haiyan, speaking to reportersShe told reporters that on Sunday “we saw the video come out. This so-called journalist, undercover journalist that [came with a predetermined agenda. The purpose is clear. One of their purpose was to smear the Chinese companies here and attack the China-Guyana cooperation,” Haiyan said, adding “it’s quite clear that it was edited with a malicious purpose”.

The two main opposition parties have called for an independent international criminal investigation after Vice President Bharrat Jagdeo on Sunday fended off fresh allegations that he had taken bribes from Chinese investors.

Jagdeo has already indicated that he intends to take legal action against Guyana-based Chinese businessman, Su Zhi Rong for sullying his name and engaging in extortion.

“Su denied having said this. Now, I have seen the release that he has actually said this so now I’ll have to ensure that I take some steps in regard to dealing with that because he has used his friendship to basically leverage it and in so doing destroying my reputation and extorting investors,” Jagdeo said.

But in separate statements, the People’s National Congress (PNC) and the Alliance For Change (AFC), that formed the majority parties in the last coalition A Partnership for National Unity (APNU) government here, both called for independent investigations, while expressing concern about alleged acts of corruption in the government.

However the Chinese diplomat, who paid a courtesy call on President Mohamed Irfaan Ali on Monday, where they “exchanged views on the series of events to celebrate the 50th anniversary of China-Guyana diplomatic relations and the progress of bilateral cooperation, said all Chinese companies in Guyana understand the need to be above board in their interactions, so as to maintain the continued good relations between Guyana and China.

“The Chinese government and Embassy is always requiring, and we believe, that Chinese companies here in Guyana they’re doing business following the local laws, international practices and market rules. And they participated in the projects through open and fair competition,” Haiyan said.

“Since they came to Guyana, they need to abide by the local laws. If there’s any violations then the Guyanese government will take action,” she added.

A statement posted on the Chinese Embassy here said that during the meeting with President Ali, the Ambassador reiterated that Beijing “stands ready to work with Guyana to seize the good opportunities presented by the 50th anniversary of bilateral diplomatic ties to deepen the mutual political trust, strengthen economic and trade cooperation, and bring this relationship to new heights”.

The statement quoted President Ali as saying that China is not only an important partner, but also an important friend of Guyana.

“Guyana values its friendship with China and remains committed to working with China to further deepen mutual trust, promote cooperation, enhance cultural exchanges and push forward the friendly relations between Guyana and China.”

“According to data from China Customs Authority, bilateral trade exceeded US$500 million for the first time in 2020, and reached US$710 million in 2021. Moreover, with the rapid development of Guyana’s oil-and-gas industry, the trade between China and Guyana grew by 213 percent in the last five years, with an average annual growth rate of over 42.5 percent,” the Chinese diplomat said.

“The establishment of relations between China and Guyana opened a new chapter of Caribbean relations, because Guyana is the first country in the English-speaking Caribbean to establish diplomatic relations with China,” she added.