KINGSTON, Jamaica - Chief Justice Bryan Sykes has taken issue with an editorial published in the Jamaica Observer newspaper this week which he said casts aspersions on the integrity of regional judges and that their decisions are open to political interference. 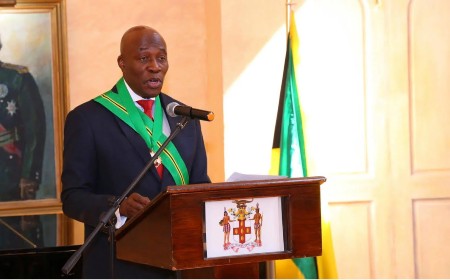 Chief Justice Bryan SkyesIn the editorial entitled ‘The Woeful Misapprehension of Dr. Lloyd Barnett’, the newspaper expressed opposition to Jamaica acceding to the appellate jurisdiction of the Trinidad-based Caribbean Court of Justice (CCJ), claiming that politicians have intervened in the judicial process within the Caribbean to “influence outcomes on their own behalf or that of connected parties.”

Chief Justice Sykes has challenged the Jamaica Observer to produce the evidence to support its claim, adding that it is wrong to malign judicial officers by making assertions without any proof.

“If the Observer has any evidence that any politician or anyone has interfered with and produced a result as a result of their influence, produce the evidence. What you (the Jamaica Observer) are really asserting is that despite coming to King’s House and taking the Judicial Oath of Office….‘to decide the cases without fear, favor, malice or ill-will according to the law, usages and Constitution of Jamaica’ – judges have in fact departed from this,” Chief Justice Sykes said.

“If that evidence is not available, don’t make the naked assertion without proof. Let us know who the judge is [and] identify the decision. It also applies across the region. Appellate courts have been in the region now for the better part of half a century. So if there is that evidence, produce it. We don’t know of any. We have never seen any,” the Chief Justice added.

In another editorial urging Jamaica to heed the senior counsel and stay with the London-based Privy Council, which is the country’s highest court, the newspaper wrote “our fear is, as we have stated before, our regional politicians, at least a good number of them, are predisposed to interfere in the legal process, using their extensive links and personal contacts to frustrate nearly every system, including the justice system.

“Moreover, as we have said before, and it bears repeating: “To a greater or lesser extent, the people of the Caribbean have no confidence that they will get justice when they need it. Witnesses are intimidated at will; court files routinely disappear; evidence is frequently contaminated or compromised; cases are sabotaged by corrupt officers; and there is a never-ending backlog of cases, causing people to take justice into their own hands,” the editorial added.

President of the Court of Appeal, Justice Patrick Brooks, in commenting on the case that led to the Jamaica Observer editorial said “the counsel for the successful applicant lamented that it was a pity that he could not get justice in his own country.

“Learned counsel made that comment in supporting the retention of the Privy Council as our final court. The first comment I will make is that there is no human institution that is infallible. The judges of the Court of Appeal do not claim to be infallible,” Justice Brooks added.

“Although it is unfortunate and a pity that the Court of Appeal got it wrong in this case. It is also a pity that successive governments of this country have failed to express confidence in ourselves and have failed to adopt the Caribbean Court of Justice in place of the Privy Council as our final court. So that the Jamaican man and the Jamaican woman can like their Barbadian counterpart or [like] their counterparts in any of the other countries of the Caribbean [that] have adopted the Caribbean Court of Justice as their final court, can say I can get justice in my own territory,” The Court of Appeal President added.

The CCJ was established in 2001 to replace the Privy Council as the region’s final court. But Barbados, Dominica, Belize and Guyana are the only CARICOM countries that have signed on to its Appellate Jurisdiction, with all the member countries being signatories to the Court’s original Jurisdiction.

The CCJ also serves as an international tribunal interpreting the Revised Treaty of Chaguaramas that governs the regional integration movement.