CARICOM to Send Delegation to Haiti

PARAMARIBO, Suriname – CARICOM to send a delegation to Haiti, the French-speaking member of the regional integration grouping still grappling with socio-economic and political issues, particularly after the July 7th, 2021 assassination of the President Jovenel Moïse. 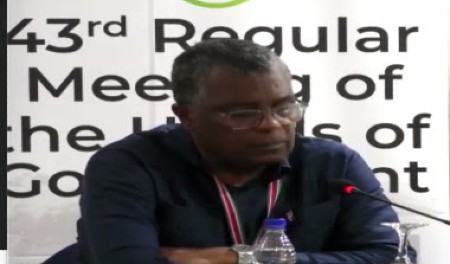 “The continued support should be there for Haiti and there is going to be a mission by CARICOM to Haiti to help with the process of reconciliation, rebuilding, restoration for Haiti, Mitchell told reporters.

He said the Bahamas, which is 90 miles to the north of Haiti’s northern border and as the closest state, apart from the Turks and Caicos Islands “is keenly interested in support for Haiti.

“Haiti has paid a very bitter price by those who, once Haiti became free, imposed so many burdens on that society that it has not had an honest chance to develop, and it is up to us we believe in CARICOM to continue to be a forceful advocate for Haiti in the international space.”

CARICOM chairman and host President,  Chandrikapersad Santokhi, told reporters that the regional leaders had received “an update on the situation in Haiti with Prime Minister Dr. Ariel Henry.

“We took the opportunity to express grave concern at the deteriorating security situation in Haiti and the Prime Minister said also that his country is looking for more support and is also calling for starting a dialogue on the national level to encourage all the people, all the institutions and other stakeholders to discuss…a good future for Haiti,” Santokhi added.

On Monday, the High Criminal Court of Istanbul in Turkey rejected a request for the extradition of Jordanian businessman, Samir Nasri Salem Handal to Haiti to stand trial for his alleged involvement in the assassination of President Jovenel Moïse.

President Moise, who served as head of state from 2017, was gunned down at his private residence overlooking the capital, Port Au Prince.

Haitian police say a group of mercenaries, most of them Colombians, was behind the attack which they suspect a Haitian doctor of ordering as part of a plot to become president.

Handal was apprehended while attempting to leave Turkey in November and was detained by Turkish authorities pending an investigation. He is alleged to have provided shelter to the main conspirator of the assassination. Interpol sent out a Red Notice alerting member states that Handal was wanted, but the notice was later lifted.

During the court proceedings, Handal’s lawyer criticized the court’s handling of the case and the continued detainment of his client following the lifting of the Interpol arrest warrant. Handal himself also argued to the judge that if he was extradited to Haiti, he would be killed.

“I went to court because of the Interpol decision, but I don’t have an Interpol decision on me at the moment. I sent a letter to the court this morning. I don’t want to be sent back because if I am sent back, I will be tortured and killed.

“Currently, my red notice decision has been lifted, I have another option to stay in prison. Is there a reason? Because there is no Interpol decision about me. If I was arrested with an Interpol search warrant and now it doesn’t exist, why doesn’t Turkey let me go? I want justice from Turkey,” he said.