GEORGETOWN, Guyana – CARICOM leaders Friday said they are “shocked and saddened” by the assassination of the former Japanese prime minister, Shinzo Abe, who was gunned down at a political rally. 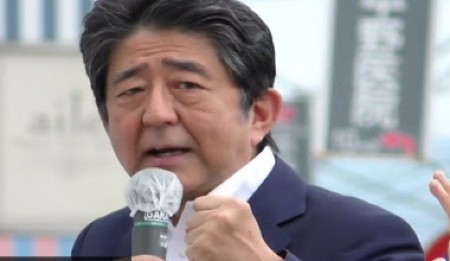 “Mr. Abe is well remembered in our Community as in 2014 he became the first Prime Minister of Japan to visit the region and meet with our Heads of Government taking to a new level the political engagement between CARICOM and Japan,” the 15-member regional grouping said in a statement.

They said it was during that visit, Abe “signaled Japan’s support in recognizing the vulnerability of Small Island and low-lying coastal Developing States (SIDS) and expressed Japan’s willingness to take into consideration issues other than GDP per capita as criteria for determining the provision of official development assistance.

“It was Prime Minister Abe who, during the Summit in Port of Spain, reset CARICOM-Japan relations by outlining his country’s three-pillar Policy towards the Community. These are co-operation towards sustainable development including overcoming vulnerabilities particular to small islands states; deepening and expanding bonds founded on exchanges and friendship; and co-operation in addressing challenges in the international community.”

Abe, 67 died after being shot during a speech on Friday in Nara. Japanese police said the shooting suspect, named as Tetsuya Yamagami, a 41-year-old unemployed man, admitted to shooting Abe.

According to police, the suspect said he had held hatred toward a certain group, which he thought Abe was linked to and used a homemade gun in the shooting. The authorities confiscated several handmade pistol-like items from his apartment.

Explosives were also found at the home and police said they had advised residents to evacuate the area.

“It is barbaric and malicious and it cannot be tolerated,” he said, adding that the attack was “an act of brutality that happened during the elections – the very foundation of our democracy – and is absolutely unforgivable”.

The murder has been condemned by world leaders and organizations.

In its statement, the CARICOM leaders said it is “highly appreciative of Mr. Abe’s significant contribution to enhancing relations between the region and Japan.

“CARICOM extends deepest condolences to the family of Mr. Abe, and the Government and People of Japan on the death of their longest serving Prime Minister and a man who made great efforts to reshape his country and its place in the world.”