CARICOM Foreign Ministers Call for All-Inclusive Summit of the Americas

GEORGETOWN, Guyana – CARICOM foreign ministers have reiterated a call by regional countries for the upcoming Summit of the Americas to “be inclusive by ensuring the participation of all countries of the hemisphere”. 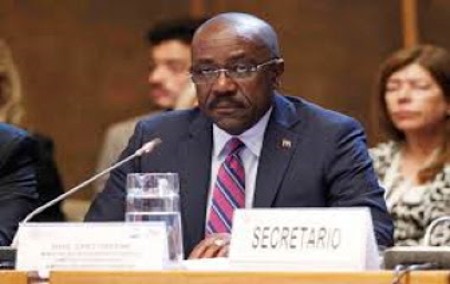 Antigua and Barbuda Foreign Minister Chet Greene chaired the COFCOR (File Photo)Caribbean leaders are still undecided as to whether they will boycott the June 6-10 Summit of the Americas if the United States goes ahead with its plans not to invite the leaders of Cuba, Venezuela and Nicaragua to the event.

The regional leaders had also expressed their opposition to Venezuelan Opposition Leader, Juan Guaidó leading a Venezuelan delegation to the event instead of the invitation being extended to President Nicolas Maduro.

A communique issued late Monday night by the Guyana-based CARICOM Secretariat following last week’s 52nd meeting of the CARICOM Council for Foreign and Community Relations (COFCOR), noted that the foreign ministers received an update on the status of preparations and “agreed that the Community would use the opportunity to advocate on issues of priority to promote a sustainable recovery, in keeping with the Summit’s theme “Building a Sustainable, Resilient, Equitable Future”.  “Ministers also called for the Summit to be inclusive by ensuring the participation of all countries of the hemisphere,” according to the communique.

Regarding Cuba, the foreign minister agreed on the need to bring forward the activities in preparation for the commemoration of the 50th anniversary of CARICOM-Cuba relations on December 8 this year, including a special meeting of CARICOM-Cuba heads of governments.

“Ministers noted the recent developments in the US policy towards Cuba, including the recent easing of some sanctions.  The COFCOR reiterated CARICOM’s support for the termination of the long-standing United States (US) economic, financial and commercial embargo against Cuba and agreed to continue to advocate in this regard,” the communique noted.

It said the regional foreign ministers also noted that CARICOM-US relations have been “re-invigorated” with a number of high-level meetings between the two sides, including the Leaders Dialogue with the US Vice President.

“Foreign Ministers welcomed the deepening of relations with Central America noting that the Fourth Summit of Heads of State and Government of CARICOM and the Central American Integration System (SICA) and the subsequent meeting between CARICOM-SICA Foreign Ministers and served to renew the partnership and enhance the bonds of friendship.

“Foreign Ministers further agreed to maintain the momentum for deeper cooperation and collaboration between the two sub-regions.”

The CARICOM foreign ministers reiterated the importance of CARICOM’s effective participation in international fora, including through the pursuit of increased CARICOM representation at senior level in multilateral organizations.

While the communique made no specific reference to the re-election of the Commonwealth Secretary General, Dame Patricia Scotland, it noted that the foreign ministers “considered and endorsed a number of CARICOM candidatures seeking positions in the United Nations (UN), the Organization of American States (OAS) and other international and regional organizations”.

It said consideration was also given to requests made by Third States for their candidatures.

During their deliberations, the foreign ministers “acknowledged” the significance of building on existing relations between CARICOM and its traditional partners, while simultaneously expanding the Community’s outreach to other regions.

They noted the progress made in the strengthening of relations with a number of Third States, sub-regional groups and non-traditional partners.

“With respect to relations with Africa, the COFCOR underscored the importance of continuing to build on the commitments made at the First CARICOM-Africa Summit in September 2021.  In this regard, Ministers discussed ways in which they can take advantage of the presence of Member States with representation in Africa to enhance existing relations between CARICOM Member States and the Continent.”

The foreign ministers also welcomed the recent developments in the relations between CARICOM and Canada, noting in particular, that the second meeting of the CARICOM-Canada Foreign Ministers’ Group had mandated the establishment of a Joint Commission that will serve as a permanent mechanism to strengthen the existing CARICOM-Canada partnership.

“Ministers expressed hope that the long-anticipated CARICOM-Canada Summit would take place later this year,” according to the communique.