LOS ANGELES, CA – CARICOM Chairman John Briceño has described as inexcusable, incomprehensible, and unforgivable, the decision by the United States to exclude Cuba and Venezuela from the ongoing ninth Summit of the Americas. 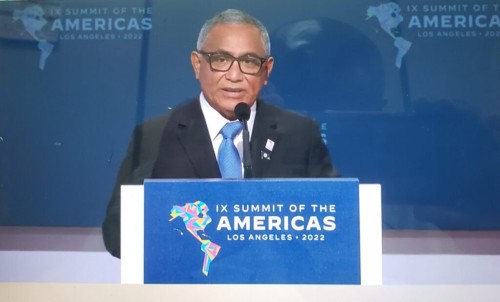 CARICOM Chairman John Briceño addressing a plenary session at the 9th Summit of the Americas on Thursday.And he has called on US President Joe Biden to lift the decades-old “illegal” embargo against Cuba.

Addressing the first Plenary Session that was attended by President Biden whose administration did not invite Cuba, Venezuela, or Nicaragua to the Summit over concerns about human rights and a lack of democracy, the Belize Prime Minister insisted that the Summit belongs to all of the Americas.

Speaking specifically about Cuba, Briceño said that Spanish-speaking Caribbean nation had provided consistent, unmatched cooperation in health to almost two-thirds of the countries in the Western Hemisphere.

He noted that Cuban healthcare experts were on the frontline in the very early and uncertain days of his country’s COVID-19 response, and many Belizean doctors and healthcare professionals are trained in Cuba.

Briceño called on President Biden to lift the blockade against Cuba and build bonds of friendship with its people.

“The illegal blockade against Cuba is an affront to humanity. It continues to cause untold suffering. It is inconsistent with our values. In fact, it is unamerican,” the CARICOM chairman said.

Similarly, he said, Venezuela had done much toward energy security for the Caribbean region through its innovative financing programs, and its absence from the Summit was “unforgivable”.

“At this most critical juncture when the future of our hemisphere is at stake, we stand divided. And that is why this Summit of the Americas should have been inclusive,” Briceño said.

“Belize rejects the unilateral right of any country to impose exclusions. We assert, unequivocally, that the principle of inclusivity must be the touchstone of all future summits. Geography, not politics, defines the Americas,” he added.

Meantime, the Belizean leader highlighted that people across Latin America and the Caribbean are weathering successive and simultaneous crises.

He said Caribbean economies are in a precarious place because of inherent vulnerabilities to external shocks, including exposure to climate change and devastating storms, and the COVID-19 pandemic and the effects of the war in Ukraine have further battered those economies.

“Notwithstanding the 6 per cent recovery in global growth in 2021, CARICOM member states, except for Guyana, recorded an average growth rate of one per cent. A few member states experienced even further GDP losses ranging from -1 per cent to -6.3 per cent.

“Member states were expected to record a stronger growth performance in 2022, but the effects of the war, rising inflation, rising oil costs and further supply chain disruptions have led the IMF to downgrade growth projection for the region. We cannot continue on this path,” he contended.

Briceño said Caribbean countries were ready to join their partners in the Americas to design measures that will provide urgent and targeted responses to arrest this decline.

“We have come to Los Angeles to agree to specific deliverables on climate change, debt relief, access to concessionary financing, energy and food security. With firm commitments we can move forward. Now is the time for actions that are focused on achieving a sustainable, resilient and equitable future for the hemisphere,” he said.

The CARICOM chairman said that action must include equitable access to vaccines and treatment for COVID-19 to end the acute phase of the pandemic; firm plans from developed countries for emissions reduction targets in line with the 1.5 degree centigrade Paris temperature goal; a plan to scale up climate finance beyond the floor of the US$100 billion annually through to 2025, and doubling of adaptation finance; finalization and use of a multidimensional vulnerability index to determine access to grants and concessional development finance; and debt relief.

He said there must also be a coordinated, multilateral response to the deepening food and energy crises including financing and technology transfer to support the acceleration to renewable energy.