CARICOM and US Agree on Need to Work Together

GEORGETOWN, Guyana,– Foreign Ministers of the 15-member Caribbean Community (CARICOM) and the United States Secretary of State Wednesday agreed on the need to work together on a number of issues of mutual interest. 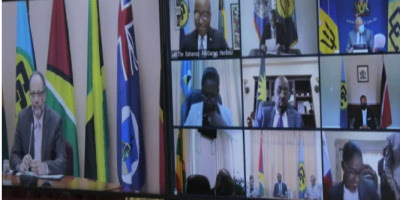 It said that Belize Foreign Affairs, Foreign Trade and Immigration Minister, Eamon Courtenay, who is also the chair of CARICOM Council for Foreign and Community Relations (COFCOR), US Secretary of State Antony Blinken and CARICOM Secretary-General Ambassador Irwin LaRocque addressed the meeting.

“This meeting is significant, as it marks the resumption of interaction between CARICOM as a region and the US at this high level. I recall that meetings at this level were a regular feature of our relationship,” LaRocque said.

He said that the CARICOM leaders were looking forward to meeting with President Biden in the near future, adding “I hope that today’s session is the start of a renewal of such encounters”

LaRocque said that CARICOM attaches great value “to the strong and enduring bonds of friendship” with Washington, noting that a “spirit of cooperation has characterized our relationship, and it has been underpinned by collaboration on a range of issues, which include, trade and investment, security, health, energy, disaster management and climate change.

“However, there are issues which we need to address as partners, such as blacklisting, correspondent banking, and access to concessional financing based on vulnerability, especially in this very challenging period for our region with COVID-19 and its economic impact, La Soufriere volcano which has impacted St Vincent and the Grenadines and the upcoming hurricane season,” The CARICOM Secretary General said.

The CARICOM statement said Courtney and Blinken also expressed support for St Vincent and the Grenadines as the country grapples with the on-going eruption of the La Soufriere volcano.

Courtenay spoke to the need for access to concessional development financing based on vulnerability, especially in this challenging period for the region given the coronavirus pandemic, the La Soufriere volcano and the upcoming hurricane season.

“The economic challenges we face, the climate risks that threaten us and the multiple vulnerabilities we experience presents a complex and unforgiving international environment,” Courtney said, adding that CARICOM welcomed President Biden’s intention to “repair our alliances and engage with the world once again”.

“We draw comfort from his pledge to “be a strong and trusted partner for peace, progress, and security,” the Belize Foreign Minister said, adding that CARICOM “ is excited by the opportunity to renew and reshape our alliance with the United States of America. And most importantly, as a Community to engage and work constructively with the United States of America on the many issues that require our collective attention”

He told the meeting that the world “we knew has been dramatically disrupted by the COVID-19 pandemic.

“Today we chose not to meet in person to reduce health risks and because of the challenges of international travel. No country has escaped the devastating impact of the COVID-19 pandemic or the climate crisis which pre-dated it.

“Mr. Secretary, of the 20 countries with the steepest economic downturn in the world in 2020, eight are CARICOM Member States. Today, high indebtedness, exacerbated by the pandemic has left some CARICOM Member states debt-to-GDP over 100 per cent, including Belize at 135 per cent, Barbados at 148 per cent and Suriname at 134 er cent.

“Our economic recovery from the pandemic will only begin in earnest when we have access to adequate vaccines. Justice, equity and the health of our people demand that we get access now.

“Additionally, we face a financing gap of about $4 billion to support our recovery. As Middle-Income Countries we have little access to development financing owing to the use of GDP per capita as the principal criterion for access to concessional financing. This is wrong,” Courtney added.

The CARICOM statement said that the CARICOM foreign ministers urged the Washington to assist with access to much needed vaccines which was an imperative for the region to emerge from the economic devastation caused by the pandemic.

The statement quoted Blinken as indicating his determination to strengthen co-operation and co-ordination, stating that he would engage with his colleague US Cabinet Secretaries on the issues of mutual interest raised by the CARICOM Ministers.