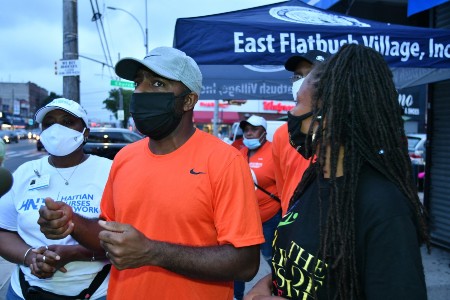 The legislators said the funding will go to East Flatbush Village, Inc., a community-based organization in Brooklyn that is working to combat gun violence through community outreach, crisis response and youth programming.

“In addition to placing more interrupters in the community to stop senseless gun violence, East Flatbush Village, Inc., will have mentors working with youth age three through 18 on esteem building and healthy self-expression,” they said.

“It has been a pleasure to work with (New York) Governor Kathy Hochul’s administration to stand up additional violence intervention programs in our district”, said Persaud, who represents the 19th Senate District.

The legislators said the grants totaling over US$200,000 will “assuredly assist in the prevention of youth being caught up in gun violence plaguing our great state and city.

“With shootings rapidly increasing, it is incumbent on those who are elected to help prevent our youth from being caught up in this health crisis of gun violence”, said Williams, the representative for the 59th Assembly District.

“We see it too often: deadly street shootouts, domestic violence killings and suicides and the frequent use of guns being used to solve dispute between neighbors and friends”, said veteran legislator Perry, who represents the 58th Assembly District.

“Too many families have been torn apart by the scourge of gun violence in our neighborhoods. Lives lost, lives ruined, young minds scarred forever.

“It has, therefore, been a priority of mine to work to stem the tide of gun violence by supporting community groups like East Flatbush Village, Inc., that are on the ground, in the streets, doing the work, which makes a positive impact on our community,” he added.

“It has been a pleasure to work with Senator Persaud and Assemblywoman Williams to secure this needed funding, which, undoubtedly, will help East Flatbush Village, Inc., expand on their vital youth programs and anti-gun violence initiatives, and make our community safer for all”, said Perry.

The co-founder and executive director of East Flatbush Village, Inc., Eric Waterman said “we are proud to be a trusted community stakeholder to have a great impact to combat gun violence.

“These resources will create opportunities to train staff, provide jobs, enhance community engagement efforts and bolster the wrap-around services we offer to support efforts in reducing gun violence,” he said.

He said the organization is thankful for leadership of the three Caribbean born legislators.

They gathered outside Florentine Plaza, a complex in the East New York section of Brooklyn, where 16-year-old Cahlil Pennington was fatally shot last Tuesday.

Adams, a 22-year veteran of the New York City Police Department (NYPD) and long-time anti-violence advocate, spoke about urgent actions that are needed on the local and national level to address the gun violence epidemic.

Pennington was one of three young people shot outside NYCHA developments in Brooklyn within a six-day span.