NEW YORK, New York – Two Caribbean American legislators have expressed their elation at Thursday’s  swearing-in of Justice Ketanji Brown Jackson as the first Black woman to serve on the United States Supreme Court, the highest court in the country. 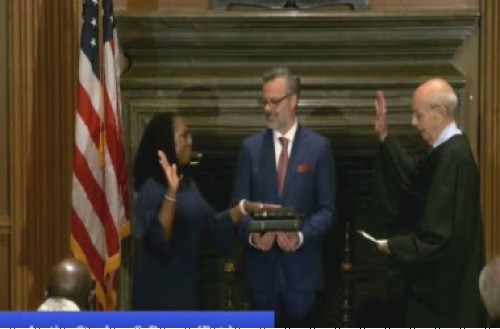 Ketanji Brown Jackson being sworn in as a Judge of the US Supreme Court watched by her husband.Justice Brown Jackson, 51, who was appointed by President Joe Biden, was confirmed in April by the US Senate. She succeeds liberal Justice Stephen G. Breyer, 83, who stepped down on conclusion of the court’s current term.

“Finally, Black women, mothers, daughters and sisters alike, can, at last, see themselves in the Supreme Court,” added the representative for the 42nd Assembly District in Brooklyn. “I’m certain this Justice will bring a sense of stability and fairness for all Americans, regardless of who they are, where they are from, or the color of their skin.

“This is a badly needed light of hope for our nation, especially after the deplorable decisions we have endured from the Supreme Court recently. This has been a long time coming. And while there is still a long way to go, we continue our journey with hearts filled with hope,” said Bichotte Hermelyn,, the daughter of Haitian immigrants.

Williams, the son of Grenadian immigrants, noted that Justice Brown Jackson’s swearing-in forges new progress on a path blazed by other historic women, such as the late Judge Constance Baker Motley, whose parents, Rachel Huggins and McCullough Alva Baker, were immigrants from Nevis.

Motley, 84, was a jurist and politician, who served as a judge of the United States District Court for the Southern District of New York. She was also the first African American and Caribbean American woman appointed to the federal judiciary.

Williams, who this week lost his bid for Governor of New York in the New York Democratic Primary, described Justice Brown Jackson’s swearing-in as “a significant moment that will reverberate, as she helps shape the direction of our country for years to come.

“Even as we commemorate this milestone and the importance it will have for Black women and girls across the country, recent decisions mean we must also consider the massive and destructive impact that the Court has had on the lives of Americans, especially of women and communities of more color in just the last week,” he said.

The Public Advocate said the “disastrous decisions” of the US Supreme Court in overturning Roe v. Wade, the landmark case giving women their constitutional right to an abortion, enabling greater access to guns and the weakening of Miranda rights (the right to remain silent when interrogated by police) “will resonate for decades.”

“Justice Brown Jackson will be an incredible addition to the Court, but, unfortunately, we do not have nine of her on the bench.  As long as a conservative ideology and agenda continue to dominate the Court, I fear it will continue to make blatantly political decisions that bring our communities and our country backwards.

“We must continue the fight in the courts, in Congress, in Albany (New York State capital), in City Hall, and in the streets, to demand true justice for all whom the current system is failing,” he added.

In taking her judicial oath on Thursday, administered by Justice Breyer, Justice Brown Jackson swore to “administer justice without respect to persons, and do equal right to the poor and to the rich, and that I will faithfully and impartially discharge and perform all the duties incumbent upon me.”

“I’m pleased to welcome Justice Jackson to the court and to our common calling,” said Chief Justice Roberts, stating that, while there would be a formal investiture in the fall, the oaths would “allow her to undertake her duties, and she’s been anxious to get to them without any further delay.”

President Biden said in a White House statement that he was “honoured that the very first judicial nominee I selected as President – the brilliant lawyer who became Judge Jackson’ – has now become ‘Justice Jackson.’

“Her historic swearing in today represents a profound step forward for our nation, for all the young, Black girls who now see themselves reflected on our highest court, and for all of us as Americans,” he said.

“The Supreme Court just gained a colleague with a world-class intellect, the dignified temperament the American people expect of a justice, and the strongest credentials imaginable.”

Justice Brown Jackson, who was born in Washington, D.C., and grew up in Miami, graduated from Harvard College and Harvard Law School.