WASHINGTON, D.C. – Caribbean American Democratic Congresswoman Yvette D. Clarke said on Friday that she “proudly voted” for passage of the Freedom to Vote Act and the John R. Lewis Voting Rights Advancement Act in the United States of Representatives. 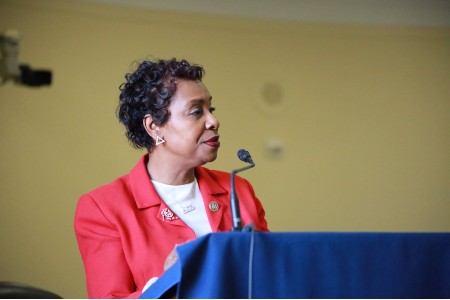 “I proudly voted for the Freedom to Vote Act and the John R. Lewis Voting Rights Advancement Act because voting is the most solemn civic duty available to Americans, and it is one that must be protected at all costs,” Clarke, the daughter of Jamaican immigrants, told the Caribbean Media Corporation (CMC). “Along with my Democratic colleagues in the House, we passed both bills and reaffirmed our dedication to delivering voting justice to all.

“Regrettably, this legislation will face an uphill fight in the Senate,” added the representative for the mainly Caribbean 9th Congressional District in Brooklyn, New York. “As they have so thoroughly proven throughout recent months, Senators (Kyrsten) Sinema and (Joe) Manchin would prefer to uphold outdated rules of a bygone era instead of protecting democracy from the threats of today, their relentless obstruction has once again stifled opportunity and inhibited progress.

“Elections should not and must not be bought,” Clarke continued. “And until the Senate is in a position to pass these critical pieces of legislation, they will continue to be sold to the highest bidder. Action is needed today, and we cannot afford to stand aside another moment as our democratic principles are eroded by partisan actors masquerading as patriots.”

She said that the shared right to vote as Americans is centered in the principle that “we have voices of equal power and are entitled to equal treatment.

“Yet, since this nation’s dawn, many Americans have been discriminately deprived of that right,” the congresswoman said. “Their diverse thoughts have been denied, their say in self-governance has been stripped – a sobering, increasingly visible fact in communities across America.”

Clarke said Republican lawmakers, within state Legislatures, and “the dark money groups who fund them are working to restrict voting freedom at every turn, through partisan gerrymandering, through economically and racially discriminatory ID laws, and through every illicit tactic at their disposal.

“Make no mistake, these bad actors will continue their campaign of assault against American democracy if Congress does not take the necessary action to stop them,” she said.

By voting to pass the Freedom to Vote: John R. Lewis Act, the US House of Representatives sent the voting rights legislation to the US Senate.

The measure, which combines critical provisions of the Senate’s Freedom to Vote Act and the House-passed John R. Lewis Voting Rights Advancement Act, introduced by Alabama Congresswoman Terri Sewell in August, passed in the House on Thursday by a vote of 220 to 203.

The Freedom to Vote Act would standardize voting election laws across America and would significantly expand voting access, including reversing the effects of dozens of new state-level voting restrictions passed this year.

The John Lewis bill would restore key provisions of the Voting Rights Act of 1965 that have been struck down or weakened by the US Supreme Court, and change the way US federal courts handle election cases.

Schumer has pledged to hold a vote by changing the Senate’s filibuster rules.

But, with Sinema and Manchin’s unwillingness to vote in favor of changing the Senate rules, Schumer’s proposal for passage of the legislation seems to be on shaky grounds.

“If Republicans continue to hijack the rules of the Senate to prevent voting rights from happening, if they continue paralyzing this chamber to the point where we’re helpless to fight back against the Big Lie, we must consider the necessary steps we can take so the Senate can adapt and act,” he said in a speech in Atlanta, Georgia.

Democrats, who hold a slim lead in the Senate, would require 60 votes, with Republican support, for passage of the Freedom to Vote: John R. Lewis Act in the Senate.