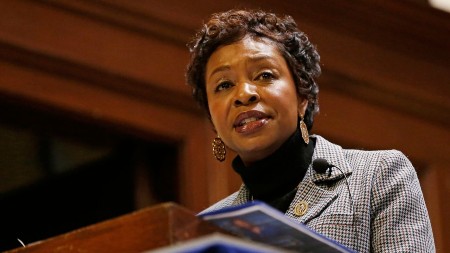 A February 22, 2017, file photo of Brooklyn Rep. Yvette Clarke speaking to supporters at a Community Town Hall in the borough. Frank Franklin II/AP.By a vote of 5 to 4, the Supreme Court on Wednesday refused to block a Texas law prohibiting most abortions less than a day after it became effective, essentially becoming what critics say is most restrictive abortion measure in America.

“Let me be very clear; this law is an all-out assault on reproductive health and rights in America and will have devastating and immediate consequences in Texas. It is wrong,” Clarke, the daughter of Caribbean immigrants, told the Caribbean Media Corporation (CMC). “Women have the right to make their own decisions about their bodies. This law eliminates access to legal abortion after about six weeks — before many women even know they’re pregnant. Congress must act.

“We must proactively legislate reproductive justice and advance substantive policies that affirm a woman’s fundamental right to choose,” added the representative for the predominantly Caribbean 9th Congressional District in Brooklyn, New York.

“I am proud to co-lead the Women’s Health Protection Act, which is comprehensive and necessary legislation that would codify a woman’s right to choose and ban the types of harmful state laws like the one in Texas that aim to eliminate reproductive justice,” Clarke continued. “We have no choice but to use every tool at our disposal to protect women, to protect a woman’s right to choose, and to project bodily autonomy for all people — regardless of gender identity, income or race. The time to act is now, because women cannot wait.”

In the majority opinion, the US Supreme Court in the case, Whole Woman’s Health et al v. Austin Reeve Jackson, Judge, et al, ruled that the application for injunctive relief or, in the alternative, to vacate stays of the district court proceedings “presented to Justice Alito and by him referred to the court is denied.

“To prevail in an application for a stay or an injunction, an applicant must carry the burden of making a ‘strong showing’ that it is ‘likely to succeed on the merits,’ that it will be ‘irreparably injured absent a stay,’ that the balance of the equities favors it, and that a stay is consistent with the public interest,” the court said.

“The applicants now before us have raised serious questions regarding the constitutionality of the Texas law at issue.  But their application also presents complex and novel antecedent procedural questions on which they have not carried their burden,” it added.

Observers say the US Supreme Court’s ruling will enhance the hopes of abortion opponents and fears of abortion rights advocates, as the highest court in the land determines in the fall whether the landmark 1973 case, Roe v. Wade, establishing a woman’s constitutional right to abortion, should be overruled.