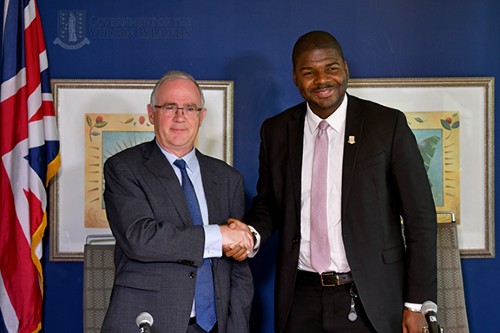 Governor John Rankin (Left) shakes hands with Premier Dr. Natalio Wheatley (Photo via Government of the Virgin Islands)“Last week, following discussions, the Government of National Unity submitted a final proposal to the UK Government outlining, with clear timelines, how they will deliver the COI recommendations but without the need for a temporary partial suspension of the Constitution,” Rankin said.

Premier Dr Natalio Wheatley said his government welcomed the UK Ministers’ agreement and that his government will work closely with Rankin, and “in the spirit of partnership with the United Kingdom, to deliver for the people of the Virgin Islands.

“Our success will be the result of doing the hard work of reforming our institutions and systems of Government and engendering a new culture in the handling of the peoples’ business.”

Earlier this month, Premier Wheatley said his newly formed government would begin community meetings regarding the implementation of the recommendations of the COI. Wheatley in a broadcast, said the meetings will begin on June 20.

“I previously outlined our proposed approach but there are fine details that we must discuss. These town hall meetings will give you a direct forum to share your direct perspectives and ideas on how we can reform government and improve the Virgin Islands,” he said in the broadcast.

In the recently released COI report, Commissioner Sir Gary Hickinbottom recommended “a return to Ministerial Government and an elected House of Assembly as soon as practicable, with the Governor taking regular advice from the Advisory Council and others on the earliest practicable date on which such government can resume.

The Commissioner is also recommending an early and speedy review of the Constitution with the purpose of ensuring that abuses of the type he has identified do not recur, establishing a Constitution that will enable the people of the BVI to meet their aspirations including those in respect of self-government within the context of a modern democracy.

In a statement last month, the 15-member regional integration movement, in which the BVI enjoys Associate Membership, said it had taken note of the release on April 29, 2022, of the COI Report and “supports the decision of the duly elected Government of the BVI to welcome the recommendations for improving governance and their commitment to work with the United Kingdom to address the weaknesses identified in the COI report.

“CARICOM agrees that the people of BVI and their duly elected representatives have the responsibility to ensure good governance with full transparency and accountability and should work together to achieve mutually acceptable solutions to address the concerns highlighted in the COI report.

“CARICOM is however deeply concerned by the Report’s recommendation to suspend “those parts of the Constitution by which areas of government are assigned to elected representatives” and taking the retrograde step of restoring direct rule by the Governor in Council as existed in Her Majesty’s colonies during the colonial period. CARICOM supports the BVI government and people in their objection to this recommendation.”

Rankin said he was pleased the government has made its firm commitment to carry out far-reaching reforms, including going beyond the COI report, to fix the failings of governance and he welcomed the detailed plan the government has set out to implement the COI recommendations.

“I also recognize that the Premier has demonstrated his commitment by making a number of changes already. Many more difficult decisions will be required to make the deep and systemic changes necessary to improve governance in the BVI and much hard work will be required,” the Governor said, indicating that the BVI government’s proposals came with certain conditions.

“I and the UK government want the Government of National Unity to succeed in making these changes and delivering the COI recommendations. But the UK government has a responsibility to the people of the BVI to make sure that happens. To ensure these commitments are kept, the proposal therefore contains several conditions surrounding implementation,” he added.

Governor Rankin said the proposal contains a set of strict delivery milestones that must be adhered to. These include regular public updates with each government ministry and their departments providing monthly delivery reports.

“I will formally assess progress every three months before sending a quarterly update to the Foreign Secretary. This will continue throughout the full period of COI implementation, which is estimated to be two years,” Rankin said.

“If the Government of National Unity, or any subsequent government, fails to deliver any of the milestones without reasonable justification, or I assess that progress is being frustrated in any way, the UK Government and I will take action to protect the interests of the people of the BVI,” he added.