With just 20 days to the Nov. 3rd general elections, Democratic Presidential candidate Joe Biden turned his attention to a voting bloc that is usually taken for granted in the battleground state of Florida – Caribbean American voters. 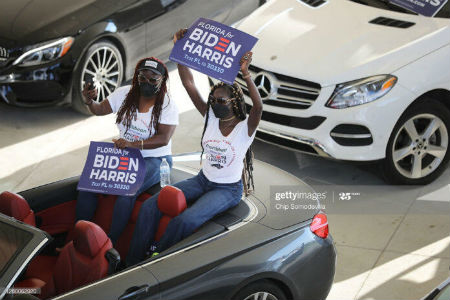 Wearing face masks and sitting in their cars to reduce the risk posed by the coronavirus, Caribbean American supporters, including Miramar Commissioner Alexandra Davis, (R), listen to Democratic presidential nominee Joe Biden deliver remarks during a drive-in voter mobilization event at Miramar Regional Park October 13, 2020 in Miramar, Florida. (Photo by Chip Somodevilla/Getty Images)Biden hosted a drive-in voter mobilization event at an amphitheater at Miramar Regional Park in Miramar, a city in southern Broward county with a significant Caribbean immigrant population, especially migrants from Jamaica, Trinidad, Cuba, Dominican and Haiti. As the horns of about 100 cars allowed in honked, Biden told those gathered in a drive-in setting because of the COVId-19 pandemic: “It’s go time! Here in Florida, you can determine the outcome of this election. We win Florida and it’s all over.”

Jamaican American Miramar Mayor, Wayne M. Messam, who had launched a bid for the Presidency in the Primary, delivered one of the warm-up speeches for Biden, urging Caribbean American voters to turn out for Biden.

“We need to have a strong showing,” he said.

Miramar Commissioner Alexandra Davis, who has Caribbean roots, wore a “Caribbean Americans for Biden-Harris” shirt to show her support, and like Messam, said Broward County is answering Biden’s call.

“We’re so energized,” Davis told the Sun Sentinel. “Kamala Harris is one of us. We’re going to turn out our base.”

“I can tell you Kamala is in the tongue of everyone. They are talking about what must be done to make sure we deliver for the team of Biden and Sen. Harris,” Jamaican-born Hazelle Rogers, the mayor of Lauderdale Lakes who in 1996 became Florida’s first Jamaican to be elected to office, told CBS local. “We are so proud, and we know that we must deliver.”

“He was consistent and on point and it should make a difference because he finally came to where it matters,” Joseph, a Miramar resident and vice president of the Caribbean Democratic Caucus told TampaBay.com. “Hopefully it will motivate our folks to get to the polls to go vote.”

Harris, whose father is a Jamaican immigrant and whose mother was an Indian immigrant, appeared last month on a Caribbean weekly radio show with Marlon Hill, stating that her favorite Jamaican dish is oxtail stew and noting that she has “every Bob Marley song that he ever sung” on her playlist.

The Biden-Harris campaign has released a TV ad on Haitian creole stations and print ads for Caribbean publications promoting Biden’s relief efforts to aid Black-owned businesses. A new ad made for English-language Caribbean radio stations refers to Harris as “our Jamaican sister.”

Florida has more than 974,000 people of West Indian ancestry. That total includes more than 300,000 Jamaicans and more than 530,000 Haitians, according to census figures. A conservative estimate for the number of Jamaican voters in Florida stands at 91,000, because many may not report Jamaica as their country of origin. Haitian voters are estimated at about 115,000.