GEORGETOWN, Guyana –A Belizean delegation has arrived in Guyana to learn about promoting the rights and development of indigenous people through the implementation of legal mechanisms and community development policies. 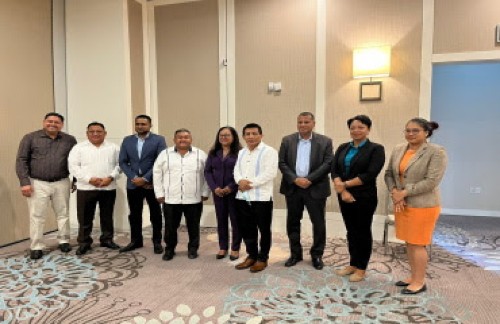 Belizean delegation in Guyana.The delegation is headed by the Minister of Rural Transformation, Community Development, Labour and Local Government, Oscar Requena, and according to an official statement issued in Belmopan, the delegation will meet with government ministries and remote community leaders “in interactive sessions to discuss successes, challenges and opportunities experienced since the adoption of the Amerindian Act”.

It said that the delegation has met with various government ministers including Pauline Sukhai, Minister of Amerindian Affairs” to discuss development programs and policies implemented by the Government of Guyana in rural indigenous communities”

The statement quoted Sukhai as highlighting the Guyana government’s “robust drive to push the Amerindian land titling project and sustainable environmentally friendly development under the country’s low carbon development initiative, which includes other priority areas such as healthcare, climate-friendly agriculture, access to potable water, electricity and other infrastructural development to promote interconnectivity and economic activities in the hinterland”.

Requena and his delegation also had discussions with villagers of the remote communities of St. Ignatius and Mainstay to discuss their experience with managing their indigenous lands, running their village councils and engaging in community development activities.

The delegation is also attending the National Toshoas Conference, which gives Amerindian leaders a platform to directly address the president and government ministers on development and rights issues.

“The Government of Belize considers the experiences of both governments and countries in the CARICOM region vital to implementing the terms of the Caribbean Court of Justice Consent Order of 2015.

“Guyana’s longstanding engagement of its indigenous peoples provides a beneficial opportunity given our similarities of history and people,” the statement added.

Requena noted that Guyana can serve as a body of knowledge for Belize, highlighting that the two countries share many things in common. He also underscored the fact that this is the first time in the history of Belize that its indigenous people are being given priority.