BELMOPAN, Belize – The Belize parliament Friday approved of legislation re-instating the 10 percent cut in salaries to public servants that the John Briceño government had instituted in 2021. 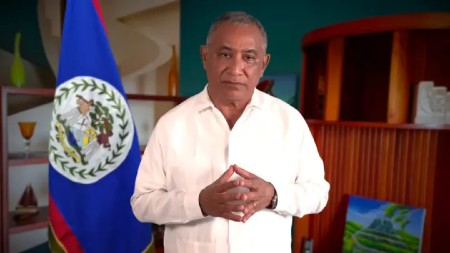 Prime Minister John BricenoPrime Minister Briceño told legislators that his government’s economic performance over the last fiscal year had improved significantly and that the restoration of the 10 percent comes two years in advance of the initially established period.

“I rise to introduce a bill for the Public Sector Emolument and Allowance Reduction Act number fourteen 2021 to reinstate the 10 percent salary withheld on account of a salary reduction imposed on certain persons appointed to hold public office,” Briceno told Parliament.

“Mr. Speaker this bill has the recommendation of the Cabinet. I will be very brief on this. It is a very straight forward bill. Last year when we met with the public officers we said that we had to cut salaries and allowances and the projection was that we are going to do it for three years.

“But, because of the performance of the economy, because of the hard work that the People’s Untied Party has done for the past year, we are now returning that 10 percent and allowances to our public officers two years in advance, two year since advance,” he added.

Last month, the Ministry of Finance issued a statement indicating that “personal emoluments will be reinstated to 100 percent, effective July 1, this year and that as a result effective July 15th, public officers are to resume their normal working hours as contained in Regulation32 of the Belize Constitution (Public Service) Regulation 2014.

The Ministry of Finance circular, dated June 21st, 2022, states that all officers on a fixed salary who were employed before June 2021—when the 10 percent cut was introduced by the Government as a cost- saving measure—and who were affected by the reduction are entitled to full reinstatement. This includes those officers whose employment has been extended or renewed without renegotiated rates.

The unions have not responded to the latest move by the government to legislate the reinstatement of the salary cut, but the Minister of Education and member of the Government’s negotiation team, Francis Fonseca, had said then that a meeting with the Joint Unions (JUNT) had been cordial and fruitful.

The President of the Belize National Teacher’s Union, Elena Smith, had also welcomed the government initial announcement to re-instate the 10 percent salary cut.