Barbados to Reform it's Constitution and Parliament

BRIDGETOWN, Barbados – Barbados’ Constitution and its Parliament are set to undergo reform in the coming months as the government moves to make them more relevant to current demands. 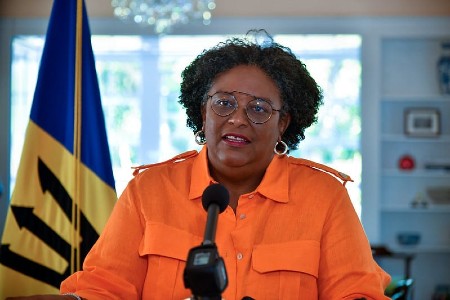 “We want the conversation to be real because we want you to be engaged in that process which will take place over a period of time, possibly more than a year,” she said as she addressed those gathered for the swearing-in ceremony of Members of Cabinet, the House of Assembly and Senate, and Parliamentary Secretaries, at State House.

The Prime Minister explained that it was Government’s intention to highlight the Constitution “chapter by chapter”, starting with the fundamental rights and freedoms and the declaratory part of the Constitution.

“We will then approach every other part of the Constitution with dedicated discussion, and there will be a Secretariat in Cabinet Office supporting the functioning of that Commission,” Mottley explained, noting that the details will be released to the public in the near future.

She added that Government was also committed to introducing People’s Assemblies this year to ensure wider participation among the people.

In addition, Mottley stated that Government had also activated the Cheltenham Commission on Parliamentary Reform.

“We have had no Parliamentary reform since 1971 when we moved from government constituencies to single member constituencies…. We believe that the People’s Assemblies will be a unique Barbadian way of local governance as opposed to local government,” she said.

The Prime Minister explained that Barbados had inherited a Parliament suited to the rigors of the plantation system where those who constituted the Parliament would come down after lunch one day a week and do the people’s business and go back to the plantations.

“Barbados can no longer be sustained by a plantation-styled Parliament and it is for that reason that the Forde Commission, as far back as 1998, recommended a greater use of Standing Parliamentary Committees,” she said.

“These three commissions will not only review major pieces of legislation…, but they will also have the right to determine and take evidence on key aspects of policy, as determined by the Committee of the Board,” the Prime Minister outlined.

She said the Committees would be joint select committees, which would include persons from the Senate and the House of Assembly.