DUBAI, United Arab Emirates – Barbados Prime Minister Mia Mottley has renewed her call for reparation for the Atlantic slave trade saying she does not consider the issue a contentious one. 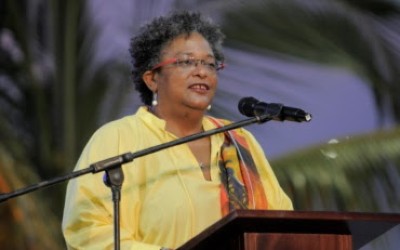 Prime Minister Mia Mottley in UAEMottley, who is on an official visit to the UAE, said that slavery not only resulted in the underdevelopment of the colonies but played an indirect role in climate change, for which compensation should also be provided.

“It should not be, either, an issue that is driven by anything other than absolute clarity that there is a development deficit today that is the result of that behavior in the past, and that development deficit has to be met with legitimately – both in terms of reparatory justice, but as we are also now explaining, climate justice,” Mottley told the media here.

She said that the former colonizers removed the wealth from countries such as Barbados and created the industrial revolution in developed nations which, in turn, contributed significantly to the world’s greenhouse gases.

“The issue [reparations] is very much alive still because people – and younger people in particular – feel strongly that whether it is the return of artefacts like the Benin Bronzes [to Nigeria], or whether it is in terms of reparations…first [there should be] apologies, but secondly also, recognizing that the extraction of wealth from our colonies led to the industrial revolution in these developed countries today,” Mottley said.

“And, ironically, that is also what led to the whole issue of greenhouse gas emissions…because it’s not just the flow of greenhouse gas, but the stock, and the stock was essentially what was driven by the industrial revolution.”

The Barbados first woman head of government said that the industrial revolution was financed by the slave trade.

“When you contrast the fact that at the point of emancipation…plantation owners who held slaves were given £20 million (One British pound=US$1.31 cents), and then by reason of the apprenticeship period for the next four years, the value of another £27 million of free labor . . . you have a £47 million-pound compensation package for those at the center of the trade, as far back as the mid-19th century.”

She said that when independence was factored in 130 years later for many ex-colonies, they received nothing other than good wishes.

“And, for the most part, therefore, it meant that they started their journey as an independent nation, yes, with a development deficit, but with treasuries that were not full with money that should have been theirs legitimately from centuries of exploitation.”

Mottley was asked  if she saw double standards in Britain’s recent issuance of visas to Ukrainian immigrants fleeing the war with Russia when compared to the treatment of Caribbean immigrants in the Windrush generation, many of whom were wrongly detained, denied legal rights, threatened with deportation, or wrongly deported.

“There is a double standard in almost every aspect, regrettably, of international relations,” she responded.

Meanwhile, Prime Minister Mottley is urging visitors who have made use of the Barbados’ welcome stamp initiative to share their experiences.

She said that the welcome stamp initiative is an example of the opportunities that can be realized when countries open their doors to overseas residents willing to become digital nomads.

Mottley expressed renewed optimism in this initiative and others on the horizon during an address at a meet and greet session in the UAE with and key stakeholders of Dubai’s Free Zone today.

She told the event that Barbados took a bold step in the midst of the COVID-19 pandemic, to “open up our borders to everyone” to spend 12 months on the welcome stamp and that one of the welcome stampers was among those on the trip to Dubai, encouraging him and others to share their experiences.

“I am glad to say that it is people like him, who really have to tell the story as to whether or not the welcome stamp has worked or not. Similarly, what it has done, is to bring opportunities for partnerships as well…If you rely only on the talent pool that you have within your boundaries, you can’t move to scale and move to become global,” Mottley said.

“The issues for us are not simple. The global minimum corporate tax movement has meant that even though Barbados moved to have one of the lowest acceptable corporate tax rates in the world, as it currently is…, there are challenges and risks from outside.

“And therefore, we have to be innovative to see how we can manage that global movement while at the same time, remaining competitive and attractive.”

Mottley noted that apart from the attractiveness of the host country, digital nomads were also interested in other attributes such as safety, access to the law courts, protection from cyber security threats and access to education and medical services.

“When we combine all of these things, we believe that we have the essence of it but what we need now is to finish and close the circle properly and to create that competitive and compelling story that will make Barbados a choice for many.”