BRIDGETOWN, Barbados – Prime Minister Mia Mottley says much thought has gone into the decision to transition Barbados to a parliamentary republic, even as Opposition Leader, Bishop Joseph Atherley, raised concerns over the legality of the government’s intended move, despite declaring full support for the impending status. 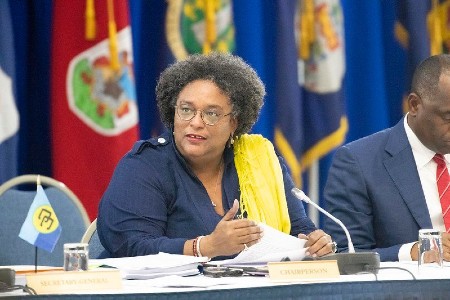 Prime Minister Mia Mottley. Photo courtesy of CARICOMParliament voted by a 25-0 margin to amend the Constitution (Amendment) Bill to bring the Republic into force by November 30.

Prime Minister Mottley told legislators that her administration was not rushing into republicanism and that talks regarding the transition began more than two decades ago.

“There can be no rush, therefore, about this Act. This Act has taken long in coming and if we go back, we agreed that there are aspects that are certainly worthy of consultation and that is the majority of the work that relates to the Constitution, we get that and we are committed to that.”

She described as a “simple but functional bill” the constitutional amendment would revoke the Barbados Order of 1966 as an Order in Council of Her Majesty while keeping complete the Barbados Constitution.

The amendment makes provision for a Barbadian to be a Head of State, change the oath of allegiance from that to Her Majesty to now the state of Barbados and to ensure continuity in all of the other aspects of the functioning of the state of Barbados through offices, appointments and commissions.

“Indeed one of my greatest regrets is that while there are a few who are still with us the majority of persons who served on this Commission and, in fact the Cox Commission, before have gone to the Great Beyond.”

The government said that the change would bring to an end a British head of state of Barbados ever since English settlers landed here in 1625 and claimed the island for King James I and Prime Minister Mottley maintained that the time had come for the transition as Barbados needed to be in complete control of all of its affairs.

She dismissed any notion that Barbados would change its name.

“What it does is allow us to close the circle with respect to independence and move to another state of our development thereby allowing Barbadians to say to the world that we have the confidence in ourselves to be completely responsible for who we are and what we do and what we say and all that surrounds itself with the nation of Barbados.

“This bill does nothing else but seek to make a Bajan the head of state of Barbados and is as simple as that because that is the lacuna that will take us from one point to another. By also revoking the Order in Council we make the clear statement that we want to be in control of our affairs as a Republic.

“Without that we will continue to always have doubts in the mind of our people as to whether we are truly independent and to whether we are truly in charge of our own destiny because if we have to send to [Buckingham] Palace in order to confer honors, or we have to send to the Palace in order to appoint an Ambassador to a non-Commonwealth country then we do not and cannot say that all power resides and locates within the nation state of Barbados and it is as simple as that.”

She told legislators that together with Atherley they will make a joint nomination for the election of a president of Barbados and a date will then be set for that election and that she expects the process to take place this month.

Barbadians will also be notified as to when the new head of state would be sworn in.

But in his contribution, Atherley raised concerns over the legality of government’s intended move to republican status, despite declaring full support for the move

The Opposition Leader citing unnamed members of the legal profession, said the manner in which government was proceeding to move Barbados from a realm to a republic with a Barbadian Head of State could be unlawful.

Atherley said he was not attacking the government but merely wanted the transition to republican status to be done the right way.

“The Prime Minister said the government has been advised by prominent persons who we have saluted and honored; Sir David Simmons, Sir Dennis Byron, Justice Sherman Moore, and I have no doubt that the government of Barbados would come to proposing this to the House on the basis of good, legal advice.

“All I am saying is that they are equally prominent persons, legally experienced, trained and acclaimed who are of the view that this is inappropriate,” The Opposition Leader said, adding “I’ve spoken to a number of legal people who hold very strongly to the view that it is inappropriate for the Barbados Parliament to seek to undertake an action that results in what we perceive to be the revocation of an Order in Council of the UK Parliament.

“Can the Barbados Parliament revoke an Order in Council of the UK Parliament?”

Atherley said he did not want a situation where the Barbados government found itself before the law court because it had erred in its procedure.

“We are exposed if we get it wrong. We expose ourselves to legal challenges brought pursuant to or consequent upon any action that we take as a people under the Constitution if it is proven we got it wrong.”

Atherley also opposed the timing to become a republic describing it as “the wrong moment” as Barbados continued to battle the coronavirus (COVID-19) pandemic, questioning whether government had an alternative agenda in ensuring the transition was done speedily.

“Beyond the constitutional and legal arguments it is a bad moment with COVID. It is not the right moment. We do not know what next year will bring, we may still be faced down with COVID. I would prefer to believe that by the middle of next year this thing would be gone.”

He also said the November 30 date for the transition was inappropriate as it could diminish the work of Errol Barrow, the Father of Independence.

He suggested that July 26, 2022, coinciding with the Day of National Significance that memorializes the 1937 Disturbances, would be most appropriate.

“I believe frankly that the better date is July 26. We call it a Day of National Significance. It is to me,  among blacks, the majority class in Barbados the birth of consciousness, it is the birth of an identity which was evolving and which has set us on a path to this moment and that the move to Republic when we get there, culminates for me what began in the 1930’s and on July 26, 1937,” said Bishop Atherley.