BRIDGETOWN, Barbados – Barbados is expected to have draft policy and legislation on the rights of Persons with Disabilities (PWD), by November 30. 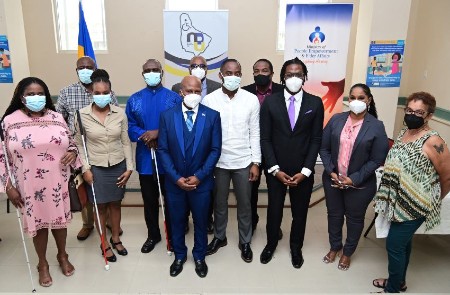 The Committee will be Chaired by Edmund Hinkson, while President of the Barbados Council for the Disabled, Kerryann Ifill, will serve as Deputy Chair.

Speaking during the launch, Minister of People Empowerment and Elder Affairs, Kirk Humphrey, described the establishment of the Committee as important, noting that there were still some people in Barbados who hid their children with disabilities.

However, he acknowledged that concept was changing, and said the necessary systems needed to be in place to help persons with disabilities, and offer some level of support, so they were likely to come forward naturally.

Humphrey explained that the Advisory Committee was given a specific mandate by Government.

“The first is to prepare a national policy on disabilities and a draft bill, which offers comprehensive protection to persons with disabilities. They are also supposed to review the draft legislation,” Humphrey pointed out.

He noted that there was a need for a more comprehensive and modern piece of legislation which spoke to the wider issues.

“The Government has asked that by the next six months, by November 30, that we have that draft policy and draft legislation,” he indicated.

The Committee has also been tasked with developing the terms of reference for the Commission for Improving the Lives of Persons with Disabilities; working towards the preparation of a set of robust disability protection regulations; and establishing relationships with other ministries through Memoranda of Understanding to solicit information.

The Minister further disclosed that Chair of the Law Reform Committee, Sir David Simmons, had agreed to work with the Committee to help with the legislation and drafting. He will be joined by Professor Velma Newton of the IMPACT Justice Project, who has also offered her resources to render assistance.

“We have the benefit of a lot of expertise in the Committee and outside the Committee. I know this Committee will do very transformative work. I expect Barbados will have the best piece of legislation in relation to this. We will be offering the best protection for persons with disabilities, and the best opportunity for employment for persons with disabilities. The Ministry must move from protection to empowerment…,” Humphrey said.

Once established, the Commission will strive to ensure that the unique challenges faced by persons with disabilities are brought to the forefront, so that they may be adequately ventilated and solutions identified.

The National Disabilities Unit will serve as the Secretariat for the Committee.