BRIDGETOWN, Barbados – Attorney General Dale Marshall says the Barbados government will delay all business in the Senate pending a decision from the High Court on whether the Upper Chamber may sit with three vacancies still to be filled. 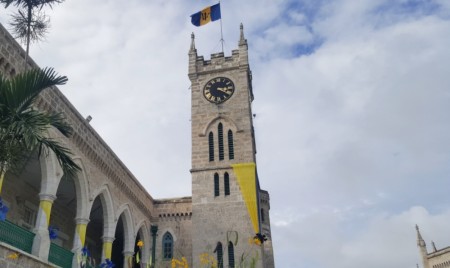 Barbados Parliament building (File Photo)“We have decided that at least until the case is heard, to have the Senate continue to meet would first of all put some senators in an uncomfortable position, because lacking the certainty of a decision, some senators might have their own personal discomforts about participating,” Marshall told the online publication, Barbados TODAY.

“Secondly, the work of the Senate is of extreme importance. It is very significant and it would be unwise to proceed and to pass legislation in circumstances where there is a matter challenging the validity, that would cast a pall over the work of that very August body,” he said, adding “so on the assumption that we will be able to get this case done quickly, we have taken a decision to delay,”

Lawyers representing former attorney general, Adriel Brathwaite Q.C, have filed a constitutional motion asking the Supreme Court to rule on whether or not the Senate in the Barbados Parliament has been properly constituted.

“More importantly, any business that it purports to conduct will be devoid of validity. Despite the clear, urgent calls for the rectification of this unsatisfactory state of affairs, the Government has unlawfully proceeded to pass, in the House, a Bill for an Act of Parliament that alters the Constitution itself, at a time when three of the members of the august Senate body have not been appointed and will, consequently, have no opportunity to debate or vote on these crucial proposed constitutional amendments.”

A High Court judge has since adjourned to February 25, the constitutional motion. Madame Justice Cicely Chase, who heard case management submissions from Brathwaite’s attorney Garth Patterson, QC, and the government’s lawyer Leslie Haynes, had ordered the attorneys for the Government to file and serve any affidavits in response to the suit by February 17 and that both sides will file written submissions by February 23.

Parliament met on February 4 month for the first time since Prime Minister Mia Mottley led her ruling Barbados Labour Party (BLP) to a sweep of all 30 seats that were at stake in the January 26 general election.

She told legislators that her administration was simply “doing the right” thing in amending the 55-year-old Constitution to change the qualifications for membership in both houses of Parliament.

Since the first parliamentary sitting the Senate has been adjourned sine die, that is, with no fixed date for resumption.

“We haven’t adjourned it sine die because of the case, but we have decided not to summon the Senate at this time on the basis that the case is heard quickly,” Marshall said, adding that the parties will meet on Friday for a case management conference to discuss a range of matters including timelines.

“I am not going to anticipate what that timeline will be,” said Marshall, regarding the next Sitting of the Upper Chamber.

He said that the decision to delay business in the Senate does not extend to appeals that could be heard at the local Court of Appeal or the Trinidad-based Caribbean Court of Justice (CCJ), the island’s highest court.

“Right now, we are thinking no further ahead than what we are dealing with. We are dealing with an issue that is before the High Court and as I said, we don’t want to have the Senate operating where perhaps one or more senators is doubtful as to the legitimacy of the Senate.

“Certainly on the government’s side we are comfortable, but I still have to take into account that there are independent senators who may have concerns and so to force them into a situation like that would certainly not be consistent with the high standard that that body is called to engage in,” said Marshall.