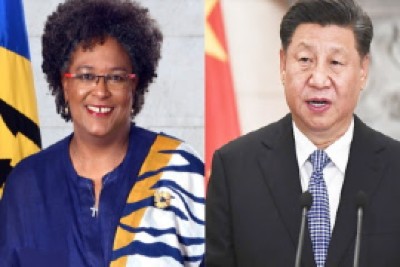 Prime Minister Mia Mottley and Chinese President XI Jinping (Photo courtesy BGIS)A government statement issued following the talks said that the future of several key infrastructural projects in Barbados had also been discussed during the near one hour meeting on Tuesday.

It said that the discussions ranged from the coronavirus (COVID-19) pandemic, concessionary financing, the redevelopment of the National Stadium and the upgrading of the South Coast Sewerage System to an invitation to President Xi to visit Barbados.

“I wish to register Barbados’ deepest appreciation of China’s support since the beginning of the COVID-19 crisis, but, in particular, for the provision of PPE equipment and supplies to assist us in our pandemic efforts.

“In addition, where the equitable and fair distribution of vaccines has been lacking, I commend you, President Xi, for your ongoing action to ensure that COVID-19 vaccines become a global public good. This is the most important decision the world can make today because it is only then that they will be accessible and affordable,” Mottley said, adding that “I support your call fora global forum on vaccines, and indeed, add to it that we establish an international clearinghouse that would provide fairness for everyone”.

She said that that Barbados’ recovery was dependent on economic growth, which itself required access to concessional funding through facilities such as China’s Belt and Road Initiative (BRI).

The statement said that Prime Minister Mottley updated the Chinese President on projects in Barbados that are benefiting from the BRI, including the redevelopment of Sam Lord’s Castle and the Scotland District Road Rehabilitation program.

She also requested accelerated approval for the South Coast Sewage Treatment Plant loan, given the urgent need to complete this work.

“In a similar vein, Prime Minister Mottley thanked President Xi for China’s agreement to provide grant funding for the redevelopment of the National Stadium but asked that the formal approval be expedited,” the statement said.

It added that during the discussion, President Xi committed to strengthening the relationship that has seen increased bilateral cooperation, trust and respect over the past 44 years. He also praised Barbados’ “strong commitment” to the One-China principle.

The Chinese leader also noted that both China and Barbados were at a “critical stage” of their development, with Beijing building “a modern socialist society”, just as “the government of Barbados and the Labour Party are striving to build a better life” for Barbadians.

President Xi praised Prime Minister Mia for her work to grow the local economy and the standard of living of its people by paying attention to areas such as the digital economy, renewable energy, agriculture and tourism.

“The goal is to bring more benefits to our people, and China will continue to support social and economic development in Barbados by doing what we can, and we have taken notice of Barbados’ (request) for China’s assistance to rebuild the National Stadium, and we will pay high attention to this,” the Chinese leader said.

He also thanked Prime Minister Mottley for her words of solidarity when China faced the full brunt of the COVID-19 pandemic last year and promised that the two countries would work together on the issue of the climate crises, about which Ms. Mottley and Barbados are most passionate, the statement said.