NASSAU, Bahamas – Prime Minister Philip Davis says his administration does not intend to impose any new tax on the population, saying to do so would be a “last resort”. 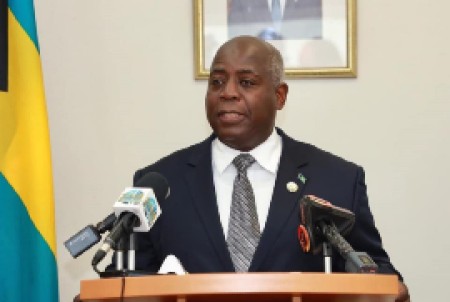 Prime Minister Phillip Davis (File Photo)Davis told reporters that he remains optimistic about his administration’s fiscal plans recalling a statement made recently that “my first job would be to see how we grow the economy; any new taxes are a last resort in our agenda”.

“We are not seeking to put any further burden on our Bahamian people. We think that our tax, that where we are now with collections and enforcements, we ought to be able to take care of the services that we need to deliver and promises we made to see them fulfilled.”

Earlier this week, Financial Secretary Simon Wilson told The Tribune newspaper that “new revenue measures” will be needed to achieve revenue projections over the next four years.

He said the government planned to bridge the “gap” to its US$1.3 billion revenue increase with “additional measures” in the upcoming mid-year budget and that some “new tax measures” will be required to achieve the projected 55.7 per cent increase in government revenues over the next four years.

Opposition Leader Michael Pintard raised alarm over the statement, calling for Davis to address the comments that “sent shockwaves nationally” and gave the “wrong signals” about the government’s plans, adding that the comments suggested new taxes were on the horizon.

During the news conference, Prime Minister Davis said he was disappointed with the pace of the restoration work on Grand Bahama and Abaco following Hurricane Dorian that hit the chain of islands in September 2019.

“I think it is personnel we asked to get things done not moving enough, and so we just have to crack the whip, and that is what we intend to do,” he said, adding that his administration has engaged an international law firm to help access funding for restoration efforts.

“I want to say in keeping with our stress to the corporate citizens of the country, we need assistance, and we need to do this together. We were able to have assistance of a corporate citizen to help us engage Holland and Knight to go out and seek grant funding for us. That is one of the… I did not want to disclose everything we are doing, but that the law firm would be lobbying for us.

“There is lots of funding out in the world particularly for climate change, and medical matters, and particularly after COVID, there’s been quite an appetite to assist jurisdictions such as our small island developing state,” Davis said, adding that “to navigate through the maze to get to it, we need some assistance, and so Holland and Knight was identified as someone that could do it”.