NASSAU, Bahamas – The main opposition Free National Movement (FNM) has called for the resignation of Prime Minister Philip Davis claiming that he had broken quarantine rules set by his administration last month in order to collect Christmas gifts. 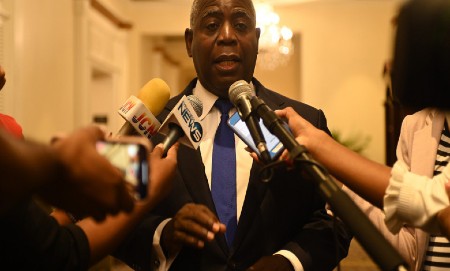 Prime Minister Philip Davis speaking to reporters. (TORRELL GLINTON via The Nassau Guardian)FNM leader, Michael Pintard said with the country still battling a fourth wave of the coronavirus (COVID-19 pandemic, Prime Minister Davis broke quarantine describing the decision as a “very serious one” and a “betrayal of his oath to uphold the law.”

Former health minister, Dr Duane Sands called for Davis to step down even as a statement from the Office of the Prime Minister said Prime Minister Davis did not breach the 2021 Health Services Rules by leaving quarantine last month.

It said that Davis had not been ordered to sequester by a medical professional..

Giffin was found shot in the head outside his home by his wife, former Cabinet minister, Melanie Griffin, on the night of December 23, 2021.

“To all of my parliamentary colleagues and persons present, I think I was the last person that Griffin spoke to before he was killed in person. After that conversation, I got a telephone conversation with Melanie.

“They said ‘Well when we close the store, we’ll let you know when the store is empty and you can come by.’ So, they called the aide about 10 minutes after six to say, ‘All clear, come now,” Prime Minister Davis added.

The OPM statement said that Prime Minister Philip Davis was informed that he had been exposed to persons who had tested positive for COVID.

But between December 22-24, Davis took three COVID tests—two PCR and one antigen—all of which were negative.

“Because the Prime Minister has had two vaccine shots and a booster shot, in addition to a prior infection, and because he had multiple negative test results, he was informed he posed little transmission risk,” the OPM statement added.

But in his statement, Pintard said Prime Minister Davis’ behavior speaks to him and his government’s “less than serious” attitude as it relates to enforcing current health rules.

“Prime Minister Davis’ admission to breaking the COVID-19 quarantine law enacted by his own government is a betrayal of his oath to uphold the law. It is a very serious offence for the head of a government to breach laws that he has a legal obligation to uphold.

“This irresponsible behavior of the Prime Minister undermines his and his government’s moral authority to compel the public to follow laws that he has willfully chosen to ignore. And as it is another example of the less than serious attitude of the government in promoting and upholding health protocols to contain and reduce the spread of COVID-19 in the population.

“Sadly, his behavior has been revealed only days after the US Centers for Disease Control and Prevention issued a Level Four travel notice for The Bahamas advising Americans not to travel here because of the rampant spread of the disease. There must not be one law for the Bahamian citizen and another law for the leader. Law abiding citizens may justifiably question whether this Prime Minister has the moral authority to lead the charge in the midst of COVID,” the FNM leader said.

According to the 2021 health services rules, anyone who breaks quarantine after being kept in isolation by a medical professional may be subjected to a fine of up to US$1,000 or up to two years in prison.