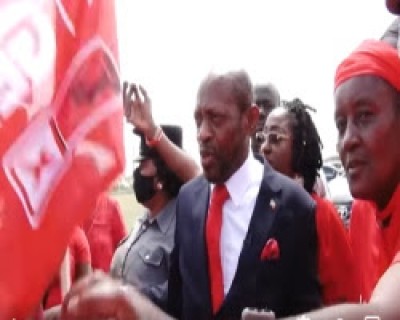 The parties will contest 11 of the 15 seats in Parliament with the other four legislators being nominated by the Governor General following the polls..

Prime Minister Harris was forced to dissolve Parliament on May 10 paving the way for the general election after legislators from PAM and the CCM – two members of the coalition Team Unity government – accounting for seven of the nine seats in the Cabinet had filed a motion of no confidence in the Prime Minister, who scuttled that move by firing the dissidents and indicating that he would announce a date for the polls within the stipulated 90 day period.

In a video message, Harris urged voters to ensure that they secure their future “with a growing economy. 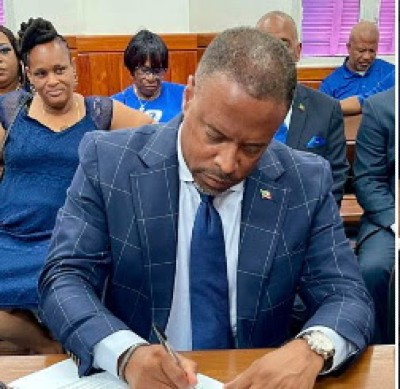 “A future where people are protected and where jobs are being created. But this future will not happen by accident. We live in uncertain times …you will decide who to trust to manage the economy in these global uncertain times. Now is not the time to choose inexperience,” Harris added.

“I thank you again for your support. My dear people, so far we are winning the election, but today is another formal step in ensuring that you return the right candidate.

‘Now we have another week of serious campaigning. We must go from door to door, use our cell phones…speak to our relatives in the diaspora reminding them that only a few more days for victory. We shall return decency to governance again,” said Douglas, who last year stepped down as leader of the party. 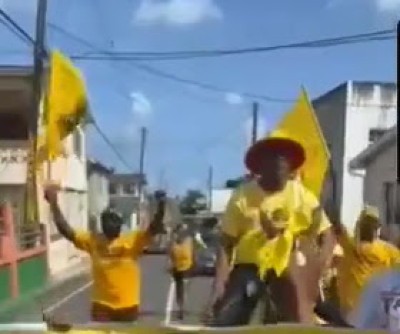 PAM leader, Shawn Richards on horseback to hand in his Nomination papersThe election is taking place amid concerns being raised by the political parties that the measures put in place to stem the spread of COVID-19 have not been lifted, even though most, if not all Caribbean countries have relaxed those measures.

St. Kitts-Nevis still has in place the requirement for pre-travel authorization, even for nationals to enter the twin island Federation.

“Knowing the man that is Timothy Harris, he will do anything including trying to block PAM people and CCM people and Labour from coming home to vote. So we have to be concerned about any effort now to manipulate the entry systems in …frustrating now the efforts to citizens to vote,” said CCM leader and Nevis Premier, Mark Brantley, adding “in relation to the travel protocol I think the concern is a legitimate one”.

SKNLP leader. Dr. Terrence Drew, a medical practitioner, has in the past called on the government to lift the measure, adding that there is no good medical reason for such a measure to remain in place.

Since the first case of the virus was discovered here in 2020, St. Kitts-Nevis has recorded 46 deaths and 6, 430 infections.

Meanwhile, the St. Kitts National Youth Parliament Association (SKNYPA) in a statement called “for patience as the electoral process is completed and respect for the final outcome of the race.

“The results, no matter the decision, ought to be respected by all parties, candidates and citizens guided by an atmosphere of peace and stability. In the coming days, the SKNYPA will, through social media and other means, conduct a public awareness campaign on the electoral process and all are encouraged to follow along as we head to the polls,” it added.