ST. JOHN’S, Antigua – Antigua and Barbuda Prime Minister Gaston Browne says his country is in the process of signing a mutual agreement with Guyana covering several areas of cooperation. 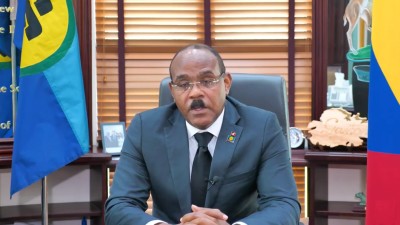 Prime Minister Gaston BrowneHe said President Dr. Irfaan Ali is “driving” the region’s agricultural program, which he and others in the Caribbean are supporting.

He is very passionate about it and I am sure that is one of the areas of cooperation we will have in our agreement. I am hoping we can look at other areas including petroleum storage”.

Caribbean Community (CARICOM) leaders at their just concluded Inter-Sessional summit in Belize, noted the role played by Ali, who has lead responsibility in the CARICOM Quasi Cabinet for Agriculture, on the work completed in advancing the CARICOM Agri-Food Systems Agenda.

“Heads of Government recognized the challenges to the achievement of the reduction of the Region’s food import bill by 25 per cent by 2025 and the need for increased financial support, including though national budgets.

“In that regard, they committed to addressing the investment required and the attendant implementation timelines to achieve that objective and agreed to the staging in Guyana of an Agricultural Investment Conference on 19-21 May 2022 to accelerate the process of identifying alternative financing solutions,” according to the communique issued afterwards.

Browne said that the West Indies Oil Company here is “easily the third largest storage facility in the Caribbean only smaller than Jamaica and the one in Trinidad, so I think that’s one of the areas we could look at especially when Guyana begins to produce its own fuel and we can supply the rest of the Eastern Caribbean”.

Browne said he would also be using the opportunity to raise the issue of cooperation regarding the cash-strapped regional airline, LIAT, adding that he would soon be extending an invitation to other Caribbean islands to participate in the venture.

“LIAT is a possible area of cooperation. In fact at the last CARICOM conference, I invited my colleagues to join us in a conference that we will host shortly to look at say, the creation of a new LIAT 2020 which would not have the legacy issues of the old LIAT.”

Browne said that his government is still awaiting a response from the trade unions to his administration’s offer of a 50per cent “compassionate” compensation package for former LIAT employees.

“As soon as the unions understand that …and they decide to treat with us then we will make firm arrangements,” Browne said.

The government said it is providing two million dollars (One EC dollar=US$0.37 cents)”to meet partial satisfaction of the cash component of the compassionate payout” to former local employees of the regional airline.

But the Antigua and Barbuda Workers Union (ABWU) has likened the offer from the government as “seeking to bribe employees into accepting whatever it has placed on the table with respect to the employees’ entitlements”.

The ABWU said that the “notion that the severance/terminal benefits payout which is put out as a compassionate payment is grossly exaggerated and can be readily perceived that the government is seeking to bribe employees into accepting whatever it has placed on the table with respect to the employees’ entitlements”.

The airline is owned by the governments of Antigua and Barbuda, Barbados, Dominica and St Vincent and the Grenadines (SVG). Last year, Browne said that a decision had been taken that would allow Barbados and SVG to turn over their shares in LIAT to Antigua & Barbuda for one EC dollar.