WASHINGTON, DC - Jamaica’s Ambassador to the United States Her Excellency Audrey Marks has extended congratulations to a number of winning candidates of Jamaican heritage in last Tuesday’s mid-term elections in the United States. 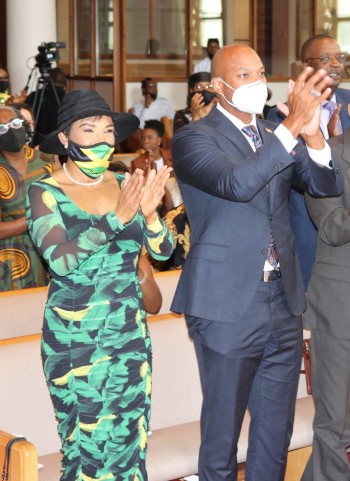 Jamaica’s Ambassador to the United States Her Excellency Audrey Marks (right) is joined by then Democratic Party gubernatorial candidate – now Governor-elect of the State of Maryland – , who is Mr. Westley Omari Moore a son of Jamaican parents, applauding a presentation as Jamaicans in the Washington DC-Maryland-Virginia (DMV) region to celebrate Jamaica’s 60th anniversary of independence. Occasion was a church service of thanksgiving to mark the Jamaican Diamond Jubilee, held at Sligo Seventh Adventist Church in Takoma Park, Maryland, on Sunday, July 31, 2022. (Derrick Scott Photo)Topping the list is Mr. Westley Omari Moore, an African American of Jamaican heritage who created history by being elected the first African American Governor of Maryland, and only the third Black person to be elected Governor in the United States.

Governor-elect Wes Moore, whose mother was born in Westmoreland, Jamaica, and Attorney General-elect Anthony Brown, led other members of the Caribbean Diaspora in victories in state and local elections in the State of Maryland.

Born in Maryland and raised largely in New York, Moore graduated from Johns Hopkins University and received a master’s degree from Wolfson College, Oxford as a Rhodes Scholar. After several years in the U.S. Army and Army Reserve, Moore became an investment banker in New York.

A political newcomer, Wes Moore won by 25 percentage points, the largest margin of victory in over 40 years and places the governorship back into the hands of the Democratic party after two terms.

In congratulating Governor Elect Moore Jamaica’s Ambassador to the United States Her Excellency Audrey Marks expressed congratulations on behalf of the Government and People of Jamaica as well as Jamaicans across the diaspora here in America.

She pointed out how enormously proud Jamaicans are of Gov-elect Moore not only because of his victory but for having done so with the grace and humility befitting a true servant of the people.

In the process she noted that Mr. Moore drew renewed and positive attention as exemplar of Jamaicans in the Diaspora, representing respected models of responsible citizenship and as able, contributing members of the American society.

There are approximately six candidates of Jamaican heritage who won elections in the State of Maryland. By becoming the first black attorney general in the state, Brown has also created history. He was the lieutenant governor for eight years and a three-term congressman.

She also had special words for new Attorney General Anthony Brown, who she applauded for the inspiration that he has provided to so many Jamaicans in the US and all over, that began with his father in Jamaica and continues in Maryland as the son of a Jamaican immigrant commanding one of the highest posts in the State of Maryland.

Maryland also celebrated the re-election of state senator Arthur Ellis who was born in Portland, as well as two delegates to the Maryland General Assembly – Jheanelle Wilkins from Spanish Town and Regina Boyce.

Ambassador Marks also extended congratulations to US Congresswoman Yvette Clarke, who won her Brooklyn Congressional seat for the 9th consecutive time, and Congresswoman Shelia Jackson Lee of Texas, who also has retained her seat in Texas.