WASHINGTON, DC- Jamaica’s Ambassador to the United States, Audrey Marks, has characterized the recently concluded visit to Washington by prime minister Andrew Holness, as very rewarding and punctuated with productive engagements that will redound to the benefit of Jamaica. 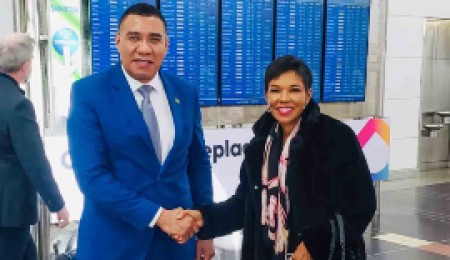 She said the visit was undertaken to strengthen connections between the administration of both countries in the context of the 60th Anniversary of Jamaica’s Independence as well as 60 years of bilateral relations between Jamaica and the United States of America.

During the discussions with the Biden Administration, she said Prime Minister Holness proposed what he called “Plan Secure Jamaica,” a new framework within which the two countries can enhance cooperation for mutual benefit.

This mechanism, she said, would promote Jamaica as a model in the Region of how a democratic country can achieve prosperity with US’ cooperation, support and friendship whilst offering added security and stability to the US’ ‘third border.’

Ambassador Marks said the US, in recognition of the central importance of the Jamaica-USA relationship, was very supportive of Jamaica’s proposal and the two countries agreed to streamline the current cooperation activities through the establishment of a working group. This, she said, was within the established Strategic Dialogue framework to take the relationship to a new level based on tangible and transformative outcomes.

Also incorporated in the full schedule, were meetings with private sector partners and the Diaspora.

Ambassador Marks said she was heartened by prime minister Holness’ positive interaction with members of the Diaspora via her monthly on-line town hall meeting, Lets Connect with Ambassador Marks.

Ambassador Marks pointed out that Prime Minister Holness was appreciative of Vice President Harris for her signal validation of the US relationship with Jamaica by way of her support for the island’s economic recovery, by way of investment and crime prevention and immediate allocation of over JA$6B for Jamaica.

This is in addition to JA$2B already committed for Jamaica and the Caribbean Region for Covid and Energy support.

She said Prime Minister Holness also used the opportunity to express hope for stronger relationship with CARICOM as the countries endeavor to secure the future prosperity of the region and prepare for the Ninth Summit of the Americas.

Jamaica’s top diplomat to the United States, Ambassador Marks, said she was “ heartened by the continued positive developments which underscore the importance of the enduring partnership between the two countries. We will continue to work tirelessly to ensure that Jamaica and its interests remain a priority on the US’ international agenda.”

She pointed out that “Jamaica’s relationship with the United States continues to be robust and as we approach its 60th anniversary of diplomatic relations between Jamaica and the US, we are confident that our partnership will continue to grow from strength to strength.”

Ambassador Marks further noted that while in Washington, the prime minister was also a guest of the National Press Club of Washington, where he fielded questions about Jamaica’s relationship with the United States.