266,000+ Barbadians are Eligible to Vote During Wednesday's General Election

BRIDGETOWN, Barbados – The Electoral and Boundaries Commission (EBC) Monday said that just over 266, 000 people are eligible to cast ballots in Wednesday’s general election that Prime Minister Mia Mottley has called 18 months ahead of the constitutional deadline. 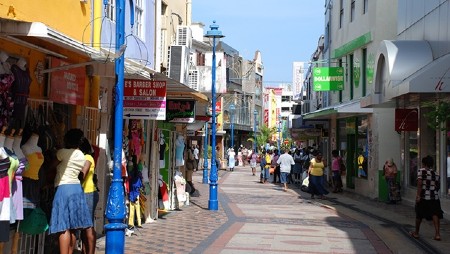 Photo courtesy of The Commonwealth“I can now tell you that 266,330 persons are registered to vote. The register for elections has been printed and distributed to all political parties and independent candidates and the election officers are collecting the last of their equipment and supplies as we speak,” EBC chairman, Leslie Haynes told a news conference, adding “I can say to you all that the EBC is ready for general elections on January 19, 2022”.

In the last general election, there was a turnout of 60 per cent with 255, 833 people eligible to vote.

A total of 108 candidates, representing seven political parties and nine independents are contesting the poll that political observers say will be a straight fight between the ruling Barbados Labour Party (BLP) and the Democratic Labour Party (DLP).

In the 2018 general elections, Mottley created history when she led the BLP to a clean sweep of all the 30 seats in the Parliament, defeating the then DLP administration of Freundel Stuart.

Haynes told reporters that the EBC will be following the COVID-19 protocols “to the letter” urging voters to main social distancing, wear masks and wash their hands frequently.

“In addition, the polling booth will be sanitized after each voter and there are large numbers of new pencils at each polling station, but if at all pencils have to be reused they will be sanitized,” he said.

The poll clerk will not be taking ID card from voters but will instead request the voter to show the front and back of the card. However, the poll clerk and presiding officer will sanitize their hands after any contact with the voter,”

Haynes said the voters should also consider casting ballots throughout the day to avoid “a bunching up” at the polling stations which opens at 6.00 am (local time) and closes 12 hours later.

“We anticipate the COVID-19 requirements may slow the voting process a bit, and therefore we are requesting and encouraging employers to be lenient with employees who attend the poll during the work day,” he said.

The EBC chairman also dismissed suggestions that the voters list was late in being published, telling reporters “the EBC categorically denies that the register of electors is late.

“If you review the legislation, you will find that the 19-day period for updating the register ended on midnight on Saturday, January 15.The printing of the register was then completed yesterday, Sunday January 16, 2022”

He said at least 3,700 electoral officials would be on duty on Wednesday and that they too would be following the COVID-19 protocols outlined by the COVID-19 monitoring unit.

The EBC said that voters will not be required to present proof of vaccination or a negative COVID-19 test result to vote, but if their temperature is too high on the day they will be “given priority.

The EBC has maintained that COVID patients who are in isolation will not be allowed to vote and Haynes told reporters “the reason COVID-19 patients in isolation are prevented from voting on polling day is solely because of the COVID-19 directive currently enforced under the Emergency Management Act, which prohibits those persons from leaving isolation for any reason.

“The Commission is therefore bound by that law, and until lawmakers amend that law to allow those persons to leave isolation to vote on polling day, the Commission can only advice the public accordingly,” he told reporters.