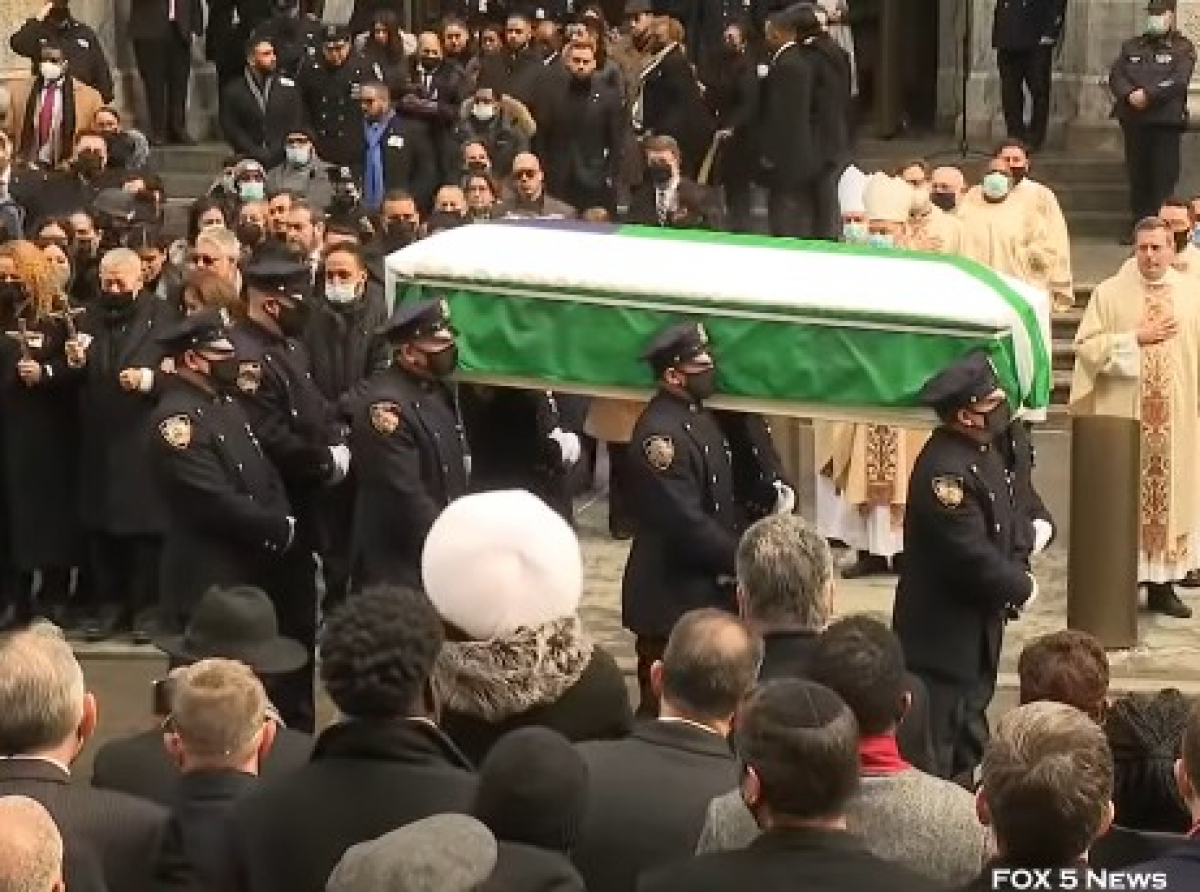 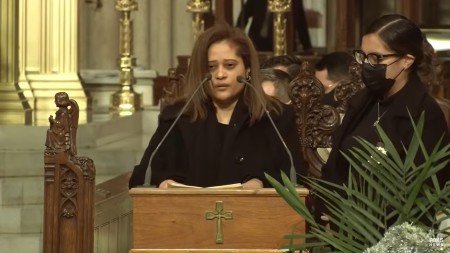 Karina Mora, Officer Mora’s sister, delivered her eulogy in Spanish at St. Patrick’s Cathedral. (Image via FOX 5 New York)The emotional farewell for the Dominican Republic born officer saw family members, including his sister, delivering eulogies in Spanish and thousands of officers lining the streets in front of St. Patrick’s Cathedral, forming a sea of blue to show their support.

Officer Mora, 27, along with Caribbean American officer, Jason Rivera, were killed by an African American gun man as they responded to a domestic violence incident in Harlem on Jan. 21st.

“It hurts me to know that two exemplary young men, like Officer Jason Rivera and Wilbert Mora, were taken before their time,” Karina Mora told the thousands of mourners inside Manhattan’s St. Patrick’s Cathedral in Spanish. “Two young men who wanted to make a difference and a change in their city with their service and their sacrifice.”

Karina Mora also slammed the justice system, asking how many police officers have to die before any changes are made.

“How many more lives of those who protect us will be taken by violence and crime? How many mothers? How many mothers, how many sons will have to lose their families, to go through this trauma and this type of tragedy?” she asked.

“Let us pray for Officer Mora and for his family and friends. Their pain is our pain,” Mayor Eric Adams said in remarks. “Officer Mora was not only a public servant, but an exceptional young man.”

“He absolutely loved this job. With a kind, gentle soul and an infectious laugh, he cared deeply about his family and truly valued his friends,” Sewell said.

“I just want you to know that I was always proud of you. You chose a life of service to your community and to our adopted country,” said his older brother, Wilson.

“Your son is a true American hero. But more importantly than that, you are a true American hero family and every police officer from around the world that packs this cathedral and line that street and will leave our city and go to their towns will go with faith that if I can do half of what he did in his short life, we will have led a strong life,” added Police Benevolent Association President Pat Lynch.

Officer Mora was the youngest child of a tight-knit Dominican family. They emigrated to New York when he was 7. Mora graduated from John Jay College of Criminal Justice with a bachelor’s degree in 2018 — the same year he joined the NYPD. He had 35 arrests on his record and aspirations to become a sergeant. Mora managed to hold on bravely for a few days in hospital but was taken off life support. His organs were donated, allowing him to live on.